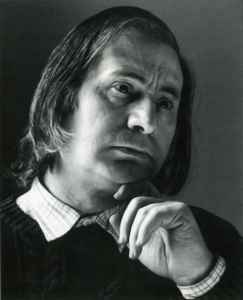 Real Name:
Alfred Garyevich Schnittke (Russian: Альфред Гарриевич Шнитке)
Profile:
Alfred Schnittke (1934-1998) was born on 24 November 1934 in Engels, on the Volga River, in the Soviet Union. His father was born in Frankfurt to a Jewish family of Russian origin who had moved to the USSR in 1926, and his mother was a Volga-German born in Russia. Schnittke began his musical education in 1946 in Vienna where his father, a journalist and translator, had been posted. In 1948 the family moved to Moscow, where Schnittke studied piano and received a diploma in choral conducting. From 1953 to 1958 he studied counterpoint and composition with Yevgeny Golubev and instrumentation with Nikolai Rakov at the Moscow Conservatory. Schnittke completed the postgraduate course in composition there in 1961 and joined the Union of Composers the same year. He was particularly encouraged by Phillip Herschkowitz, a Webern disciple, who resided in the Soviet capital. In 1962, Schnittke was appointed instructor in instrumentation at the Moscow Conservatory, a post which he held until 1972. Thereafter he supported himself chiefly as a composer of film scores; by 1984 he had scored more than 60 films. Noted, above all, for his hallmark "polystylistic" idiom, Schnittke has written in a wide range of genres and styles. His “Concerto Grosso No. 1” (1977) was one of the first works to bring his name to prominence. It was popularized by Gidon Kremer, a tireless proponent of his music. Many of Schnittke's works have been inspired by Kremer and other prominent performers, including Yury Bashmet, Natalia Gutman, Gennady Rozhdestvensky and Mstislav Rostropovich. Schnittke first came to America in 1988 for the "Making Music Together" Festival in Boston and the American premiere of “Symphony No. 1” by the Boston Symphony Orchestra. He came again in 1991 when Carnegie Hall commissioned “Concerto Grosso No. 5” for the Cleveland Orchestra as part of its Centennial Festival, and again in 1994 for the world premiere of his “Symphony No. 7” by the New York Philharmonic and the American premiere of his “Symphony No. 6” by the National Symphony. Schnittke composed 9 symphonies, 6 concerti grossi, 4 violin concertos, 2 cello concertos, concertos for piano and a triple concerto for violin, viola and cello, as well as 4 string quartets and much other chamber music, ballet scores, choral and vocal works. His first opera, “Life with an Idiot”, was premiered in Amsterdam (April 1992). His two new operas, “Gesualdo” and “Historia von D. Johann Fausten” were unveiled in Vienna (May 1995) and Hamburg (June 1995) respectively. From the 1980s, Schnittke's music gained increasing exposure and international acclaim. Schnittke has been the recipient of numerous awards and honors, including Austrian State Prize in 1991, Japan's Imperial Prize in 1992, and, most recently the Slava-Gloria-Prize in Moscow in June 1998; his music has been celebrated with retrospectives and major festivals worldwide. More than 50 compact discs devoted exclusively to his music have been released in the last ten years. In 1985, Schnittke suffered the first of a series of serious strokes. Despite his physical frailty, however, Schnittke suffered no loss of creative imagination, individuality or productivity. Beginning in 1990, Schnittke resided in Hamburg, maintaining dual German-Russian citizenship. He died, after suffering another stroke, on 3 August 1998 in Hamburg. He was married to pianist Irina Schnittke.
Sites:
schnittke.org, Wikipedia, britannica.com, imdb.com
Variations:
Viewing All | Alfred Schnittke
A. Schnittke, A. Shnitke, A. Šnitke, A.Schnittke, A.Шнитке, Alfred Garrievitch Schnittke, Alfred Schnitke, Alfred Šnitke, Schnitke, Schnittke, А. Шнитке, А.Шнитке, Альфред Шнитке, Альфред Шнітке, Шнитке

The String Quartets are brutal, lyrical, sensuous, painful, exquisite, seemingly alive...they're discrete entities, lifeforms unhampered by the tenets ov governement, posthumous psychic spawns. I was amused and impressed by the irreverence of his early symphonys...I am finding myself now unwilling to write further, I am unworthy, Schnittke reviews me from his snow-dusted soviet grave.