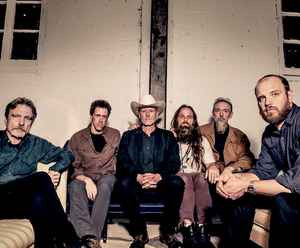 Profile:
Swans is a band from New York City, active from 1982 to 1997, reformed in 2010, founded & led by singer, songwriter and multi-instrumentalist Michael Gira. Marginally associated with the no wave scene initially, their original sound was slow and extremely heavy, best heard on the live album Public Castration Is a Good Idea. By the time Swans released twin albums Greed and Holy Money the music had sped up. Drum machines and samples were slightly more prominent. Michael Gira was joined vocally by Jarboe which gave the band a broader sonic range.

Swans eventually broke up in 1997.

I discovered Swans in the interim between their 1997 dissolution and their 2010 reformation. Their first incarnation from 1982-1997 comprises a range of musical styles I was previously unaware that a single band could pull off successfully. Much of it defies genre tags in any constructive way, but for me personally they bridge the gap between the broader post-industrial, post-punk, and nascent post-rock movements. Their charm is they don't fit neatly into any of those categories, either in terms of sound as much as image, ethos, and lyricism. They were one of those rare bands where they don't sound like anything that came before them, while any band that is directly influenced by them (Godflesh, Young Gods, Cop Shoot Cop, et al) can't do much to conceal that fact.

Sadly, and I know I'm not alone on this, the band that calls itself Swans today doesn't resemble the band I fell in love with at all. It's hard for me to articulate this in a way that doesn't sound like 'gatekeeping', but I'm confused by the audience that their post-2010 material seems to be targeted towards. Their second incarnation just sounds like boring post-rock to me... the post-industrial and post-punk elements evaporated into the ether. The sonic palette is dull and lifeless. I supported them on their first two tours post-reformation (My Father... and The Seer) and I ended up leaving early on the second date because I was so bored. Mind you, one of my favorite shows of all time was seeing SunnO))) so it's not that 45 minute drones are "too deep for me" or anything... it was just so goddamn boring.

Maybe my expectations are too high from my favorite band, but at some point in between the actual band Swans and the dissolution of Angels of Light (another band I don't like) Gira started courting the Pitchfork crowd and it shows. I've noticed that the new material has attracted an entirely new type of fanbase, and I'm happy for him that he's finally making lots of money off of his music, I just wish he'd not resurrected the Swans name for a project that has almost nothing in common with the entity that dissolved a quarter century ago. I miss the cool album artwork, the memorable lyricism, and especially Jarboe.

Much love to everyone who enjoys the post-2010 stuff, but I think it's tiresome and hollow.

April 6, 2022
Been a fan of Swans since I first heard them on the John Peel show when he played 'A Hanging'... I can't remember laughing so hard before because of how depressing a track sounded! Been following them ever since... It seems that Gira's aim is to reach down inside himself and pull out as much dirt (Filth) as he can find down there and throw it over his audience as a cathartic exercise, to try and purge himself of all the shit that life plants in his soul... that's his main aim it seems... and he's a mater of it! I often think of him as the real version of Nick Cave...

October 29, 2021
I really wish Jarboe was back in the fold full-time. The band really needs her
See 1 reply

November 13, 2020
Really one of the most original and inventive bands to come around. I remember hearing about them back in the 80s when I was living in NYC and buying Public Castration at a record store on St Marks and getting it home and thinking to myself WTF is this at first listen but that record slowly grew on my like an unholy fungus and I've been a huge fan ever since. Yes its noise, but there is a beauty to it.

The Swans need a break. The current style is getting tedious. Maybe Gira will go back to solo acoustic? That was his best period.

August 18, 2018
I've been living with the music of Swans some two decades plus and there's STILL always some new detail that enthralls me or a moment of sound so powerful that it hits me hard as a rock to the side of the head. Love it so much I wound up interviewing 125 people Gira, Jarboe, 30+ ex-Swans, Thurston Moore, Bill Laswell...) and creating the book SWANS: Sacrifice And Transcendence - The Oral History. Whole time I was doing it I wound up using Discogs to plug in some rarities or to hear things in different formats and editions...Swans is one of those bands that rewards obsession.
See 5 replies

July 31, 2018
New To SWANS...
So I've been aware that Swans existed for close to 30 years. I was always curious about them, considering references I'd come across and things I'd read over the years. Always thought I might check them out one day. So about 3 months ago I decided to dive in, and ever since I've been drowning in Swans! I specifically decided to start with the output from the original period (1982-1997) first, with the intention to go to "Angels of Light" next, and then after that dive into the modern era material ("My Father" through "Glowing Man".) To date I have acquired all the albums from the original era, and here are my thoughts so far (keep in mind that I'm still just getting to know some of it)
Swans / Filth / Cop / Young God - OK - Interesting, but I don't love it.
Greed / Holy Money / Children of God- Very good, like it a lot!
Burning World - different, good.
White Light / Love Of Life / Great Annihilator - Love it!
Soundtracks for the Blind - Good, though somewhat disappointed in the lack of "songs" - my most recent purchase, still just getting to know it (2 listens so far)
So based on all that, I ask you... Do I go to Angels of Light next? Or skip straight to the modern era Swans albums?
See 7 replies

I never knew SWANS but after hearing Gira's I'm Singing To You From My Room I became a huge fan of anything he's involved with. I like it dark and crazy and he delivers the good!

May 13, 2017
Saw them in a tiny club in '86 where they filled the room with their own PA so there was hardly any room for an audience. Proceeded to play THEE heaviest skull-crushing noise for about an hour. At points I felt myself moving backwards with the force of the pulverising attack.
My trousers were flapping in the breeze and my face felt like it was melting. The best bit was the near-silence in between each downward smash of brute-force bass. The nearest thing for comparison would be a very scary fairground ride where you don't know if you're going to survive.
I heard later that structural damage was done to the club that night. My ears rang for 3 days.
See 3 replies