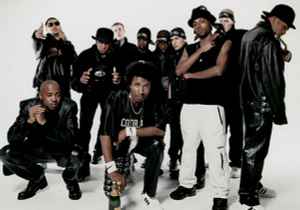 Profile:
Uk garage/hip hop collective from Battersea, South London. Rose through their shows on pirate radio station Delight FM, occupying most of the Sunday schedule which became known as 'So Solid Sundays'. The emphasis on MCs during the period where the darker side of UK garage side was developing would be an early influence towards what would develop later into grime.

April 23, 2009
The so solid crew did contribute to the ''bastardisation'' of uk garage.

How ever this was what the major lables wanted, they wanted something new and fresh to market, make money from and spit out! this country cannot handle groups such as so solid, unlike in the states with nwa, wu tang etc. we are a country of finger pointers, who like to push the blame on other people, and who better than a new bread of garage allstars. So solid aint thugs! granted some of them have had criminal pasts, but then again so has michael jackson and other well knowns! so solid are an immensly talented collective of young black english men and women, whom most of hooked up not thru crime but musical backgrounds.

So Solid Didnt kill garage, they helped put it back where it belongs, the uk underground!the sounds and influences filter thru to the mainstream in other ways. And the short lived legacy of mainstream success lives on. Garage i believe is made by people for the love of music! not for the uk umber 1 although that is a nice thought to have achieved as so solid did, but i feel that the love of the music weather it be dark and grimey, sexy and soulful or bumpy ukg shines thru this success. anyways who wants simon cowell for a fucking boss!

Garage is a self sufficent genre and has been thru alot of trasintions, as did jungle back in the day, it went back underground leaving the hevons saying jungle is dead, them along comes d'n'b a new and exciting genre taking on the elements of jungle. garage is the same thru grime bassline and dubstep!

Thats what ukg does it sneaks up in a new guise and bites the misers in the arse!

Surprised that there are no comments so far.
So Solid Crew were probably the main reason for the decline of UK Garage. They arrived just as it had hit its commercial peak and unfortunately brought all the bad press into the scene.
It seemed to change from being about the music into your attitude and how you dressed. There was also a shift from the 2-step or 4/4 beats with house vocals into a rap element and harder bass line than before. Prior to them you had good UK Garage music made by Artful Dodger, MJ Cole, Shanks & Bigfoot, Dreem Teem, Reservoir Dogs, Bump & Flex, Dem 2...
Very few UK Garage tracks since 2001 are worth a mention and although the scene carries along 'underground' in the UK, the music made now just isn't as good as it once was.
If you like UK Garage, then you would probably class 1997-2001 is the period that produced its finest music moments.