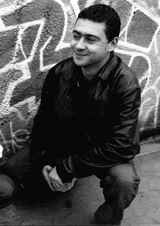 Real Name:
Alexander Reece
Profile:
Drum 'n' Bass producer from Ealing, west London,. He was turned on to acid house by hearing Dave Dorrell spin at Love at the Wag club in London. During these early days of 'Warehouse' music ,Alex met up with old school friend Ron Wells (AKA Jack Smooth).
Within a few years Ron had set up his own record label (Basement/Sound Entity) and Alex got offered the chance to help/engineer for Ron and various other artists such as DJ Phantasy, Mayhem, Top Buzz, Alex Hazzard.
It was during this period that Alex also met and worked with Wax Doctor and DJ Pulse.
By late 1993 Alex (by now writing and producing with Jack Smooth) set up his own studio (Acid Lab) with his brother Oscar, and the trusty Ensoniq Sampler (used in many of the early Basement releases) that would eventually be passed to Utah Jazz!
By this time Wax Doctor, Loft Groover and Pulse would be regulars at the Ealing based studio, and in the next few years the Original Playboys (with Pim) would also be part of the team.
After various releases on Creative Wax, Metalheadz and Basement, Alex was signed to Island Records in '95.
After the success of 'So Far' Alex was given the chance to set up a label of his own (Als' Records) with some of his fellow artists.
But by the late nineties the record industry was cooling towards Drum 'n' Bass and a second album, although delivered, was never released.
Alex continued to work with Wax Doctor on the Fallen Angels projects and with the (then) up and coming Utah Jazz until early 2003.
After 10 years away from music, Alex is once again working with Creative Wax Records and various other projects.
In Groups:
Electronic Experienced, Fallen Angels, Fallen Angels 21, Interception, Jazz Juice, Lunar Funk, Phasion, Playboys For Life, The Original Playboy, The Reece Project, Unit 1, XE-DUS
Variations:
Viewing All | Alex Reece
A Reece, A. Reece, A.Reece, Alex (Smoker) Reece, Alex Reese, Alexander Reece, Mr. Reece, Reece

August 14, 2020
Important information passed to me by djhaynes that needs documenting:

'In 2009, Stateofbass, who claimed to be the biographer for Reece's unreleased second album, wrote this on Last FM.

'A second album for Island was recorded and released as a promo tape to select people. However, Reece's music had taken what seemed to be a radical departure into old school electro and 80's techno pop territories. In retrospect the album would have been seen as an important development in the drum and bass sound, but the label dropped the album from their schedule when white labels of a lead off single received a very poor response from DJs.

In 1999 Reece once again teamed up with Wax Doctor to record an album for Sirkus. Called 'Part One' it revealed the duo to still be quite a force in the Detroit drum & bass arena.'

January 25, 2018
Alex was from my manor of West LDN Ealing! A really good producer who should have done more IMHO, he never over did anything with his music, always crisp and well produced. Alex had that Jazz vibe going on, he produced probably the biggest tune of 95 "pulp fiction" which killed everything in its path. It was moody, yet soulful and jazzy. Acid Lab was good, as was Candles, and the co-lab with Wax Doctor on Radioactive Kids. A talented producer who always left you wanting more.
See 2 replies