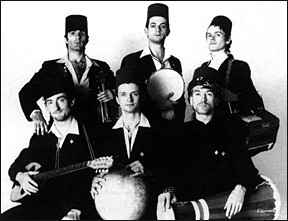 Profile:
British band 3 Mustaphas 3 did much to popularise world music in the mid- to late 80s, revealing a serious musical intent behind the elaborate mythology that saw each band member adopting 6 August as an official birthday in order to avoid confusion.