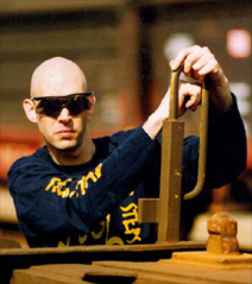 Peter-Paul Pigmans (aka 3 Steps Ahead), one of the biggest names in the gabber/hardcore scene, began his career in 1993 when his first productions appeared on Rave Records and Hard Stuff Records under the names The Illegal Alien and Silverbells. Later in 1994 he was asked by ID&T to produce for their label. He selected a new name, 3 Steps Ahead, for productions together with Rob Fabrie (DJ Waxweazle) and Ed Bout (Holographic). The cooperation never took off and Rob and Peter-Paul created only two records together, titled "Step 1" and "Step2". They decided Peter-Paul would continue with the new name and Rob and Ed went their separate ways.

The biggest hit was "Drop It", the first solo CD-single by 3 Steps Ahead. Before this, Peter-Paul created the megamix for Thunderdome VI, the Hardcore-Sex mix, also released on CD-single. In 1997 he released his first album, titled "Most Wanted & Mad", which became a huge success in the Dutch album sales charts. His second album "Junkie 4 Life", was released in 2000, a few months after he was diagnosed with cancer.

In January 1998 his daughter, Lara Jill, was born. His son, Ender Jamie, was born almost at the end of 2000 as one of the last Millennium babies. Ender has been named after "Ender Wiggins", a character in the book "Ender’s Game" by Orson Scott Card. Peter-Paul used this same character as an inspiration for his alter ego The Ender.

Peter-Paul died on the 27th of August 2003 of brain cancer. In July 2003 there was a benefit party for Peter-Paul. The money raised there couldn’t help cure him, but part of it was used to make his last weeks as comfortable as possible.
Sites:
3stepsahead.nl, Wikipedia, web.archive.org
Aliases:
Bug Slowbizy, Pedro Terzero, Peter Paul Pigmans, Silverbells, The Ender, The Illegal Alien
Members:
Rob Fabrie
Variations:
Viewing All | 3 Steps Ahead
3 Step Ahead, 3 Steps A Head, 3 Steps Ahead's, 3 Stepsahead, A Tribute To 3 Steps Ahead, Steps Ahead, Three Steps Ahead, Tree Steps Ahead

November 11, 2020
Very talanted producer! Sadly ALL of his items are ver pricey or overpriced... Other than that, he's defenitly one of the gabber-gods!
Reply Notify me 1 Helpful

But his work wasn't that so great many tracks had the same feeling and the long build up .

To name a few , but to my taste he isn't the number one biggest Hardcore/Gabber DJ

Some of his records are ridiculously overpriced but thats my opinion .
Reply  See 3 replies Notify me Helpful

August 15, 2015
This man is and will always be my source of inspiration.
RESPECT !!!
Reply Notify me 3 Helpful

January 29, 2010
Great producer, famous for his various and energetic liveshows. Sadly past away ages to soon.
Always remembered never forgotten 3 Steps Ahead!
Reply Notify me 4 Helpful

December 23, 2009
During the time Gabberhouse was at his top in Holland '3 Steps Ahead' was playing @ a lot of ID&T party's all across the nation... I never understood this. His tracks didn't really hit me and were never extremely wanted. At live shows this man was really didicated but he could never inspire me. I found (and find) his music different than the majourity and/or standard at that time; boring, long build-ups, no climax, etc.

After his death (respect for this man, he was dedicated) his work (vinyl releases) became really WANTED and i have never understood why...

Maybe i'm standing alone, i don't try to offend anybody with this respons. But i think his music missed it completely and only came though because someone at ID&T was close to him or liked his weird music.

Yes, i am still looking for all his 12" records because i'm trying to complete all early labels, never bought one because the price(s) for his records are idiot. Why, i wouldn't know...
Reply  See 3 replies Notify me 3 Helpful

Respect to this well-loved hardcore producer! Brought us all some truely amazing music which will live forever..!
Music to which this day remains like gold-dust.! Our thoughts go out to him every time we hear his music..,..
It will alwayz be played.!

A true hardcore legend! Dedicated and always a great heart for the hardcore scene. Got famous with Gabbers Unite
Unfortunately he died the 27th of August 2003 after a painfull period of having cancer.