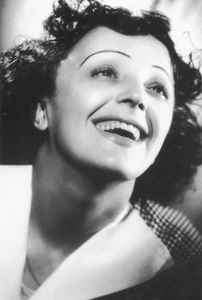 Best known for singing songs "La Vie En Rose", composed by Louiguy, with lyrics by Piaf, and English lyrics adapted by Mack David; and "Non, Je Ne Regrette Rien" written by Michel Vaucaire, which rather fittingly she sung just two years before the end of her eventful life.

In 1935 Piaf was discovered in the Pigalle area of Paris by nightclub owner Louis Leplée, whose club Le Gerny off the Champs-Élysées was frequented by the upper and lower classes alike. He persuaded her to sing despite her extreme nervousness, which, combined with her height of only 142 centimetres (4 ft 8 in), inspired him to give her the nickname that would stay with her for the rest of her life and serve as her stage name, La Môme Piaf (Parigot translatable as "The Waif Sparrow", "The Little Sparrow", or "Kid Sparrow"). Leplée taught her the basics of stage presence and told her to wear a black dress, later to become her trademark apparel. Leplée ran an intense publicity campaign leading up to her opening night, attracting the presence of many celebrities, including actor Maurice Chevalier. Her nightclub gigs led to her first two records produced that same year, with one of them penned by Marguerite Monnot, a collaborator throughout Piaf's life.

On 6 April 1936, Leplée was murdered, and Piaf was questioned and accused as an accessory but was acquitted. Leplée had been killed by mobsters with previous ties to Piaf. A barrage of negative media attention now threatened her career. To rehabilitate her image, she recruited Raymond Asso, with whom she would become romantically involved. He changed her stage name to "Édith Piaf", barred undesirable acquaintances from seeing her, and commissioned Monnot to write songs that reflected or alluded to Piaf's previous life on the streets.

In 1940, Édith co-starred in Jean Cocteau's successful one-act play "Le Bel Indifférent". She began forming friendships with prominent people, including Chevalier and poet Jacques Borgeat. She wrote the lyrics of many of her songs and collaborated with composers on the tunes. In 1944, she discovered Yves Montand in Paris, made him part of her act, and became his mentor and lover. Within a year, he became one of the most famous singers in France, and she broke off their relationship when he had become almost as popular as she was.

During this time, she was in great demand and very successful in Paris as France's most popular entertainer. After the war, she became known internationally, touring Europe, the United States, and South America. In Paris, she gave Atahualpa Yupanqui (Héctor Roberto Chavero)—the most important Argentine musician of folklore—the opportunity to share the scene, making his debut in July 1950. She helped launch the career of Charles Aznavour in the early 1950s, taking him on tour with her in France and the United States and recording some of his songs. At first, she met with little success with U.S. audiences, who regarded her as downcast. After a glowing review by a prominent New York critic, however, her popularity grew, to the point where she eventually appeared on The Ed Sullivan Show eight times and at Carnegie Hall twice (1956 and 1957).

Édith Piaf's signature song "La Vie En Rose" was written in 1945 and was voted a Grammy Hall of Fame Award in 1998.

Bruno Coquatrix's famous Paris Olympia music hall is where Piaf achieved lasting fame, giving several series of concerts at the hall, the most famous venue in Paris, between January 1955 and October 1962. Excerpts from five of these concerts (1955, 1956, 1958, 1961, 1962) were issued on record and CD and have never been out of print. The 1961 concerts were promised by Piaf in an effort to save the venue from bankruptcy and where she debuted her song "Non, je ne regrette rien". In April 1963, Piaf recorded her last song, "L'Homme De Berlin".

October 8, 2020
Just discovered her and the song "Non Je Ne Regrette Rien" via the 2020 All State Insurance commercial....
Wow, would've thought this song is from like the German occupation of France or something era.....love the
historical nostalgia wafting through recordings like this...wait, this sounds awful....albeit, sadly during times of
war like WW II....but IT WAS FROM 1961 !!!!!
Ya know? this kind of music "sounds" ....eh, you say?..... "IMPORTANT"? Get me?
gonna get her other 'hits' as well.....what a break listening to something like this rather than my
regular Rock and Ambient stuff (which I love 100%) --
USA -

December 31, 2018
Seriously? I am surprised that such an artist as Edith Piaf have not yet received a comment on the part, at least, of a French discoger! What a voice, what a trip to France of yesteryear! I think it is not necessary to develop more arguments: it's PIAF!