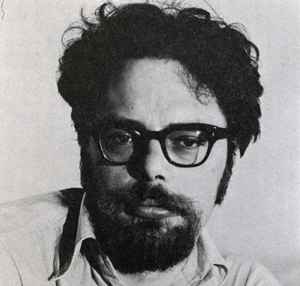 From an early stage he was aware of the importance of tape-recording techniques in the renewal and development of poetry’s resources. Text-sound-visual image, often combined with intensely personal 'live" performances, are vital ingredients in Sten Hanson's artistic workmanship and he is ore of the forerunners in the field of multi-media art. His works include electro-acoustic pieces as well as instrumental and vocal compositions. From the end of the sixties up to 1979, he worked essentially with electroacoustic music and created, with Lars-Gunnar Bodin, Åke Hodell, Bengt Emil Johnson, the theory and the practice of a new aesthetic field: "The electronic text-sound". Sten Hanson realized a large number of works in various styles : works for television, ballet music, performances, audiovisual performances assisted by computer, pieces for instruments and tape and/or electronics, works for orchestras and computer music. Hanson was member of the International Society for Contemporary Music (ISCM) International. In Sweden, he was Director (1968-1977) and then Chairman (1980-1984) of Fylkingen, chairman of the ISCM (1975-1981), member of the Royal Academy of Music of Sweden and President of the Swedish Composers' Union (1985-1994), chairman of the International Confederation of Electroacoustic Music (ICEM) from 1997 to 2002.
Sites:
ubu.com, Wikipedia
Variations:
Viewing All | Sten Hanson
Hanson, Sten Hansson