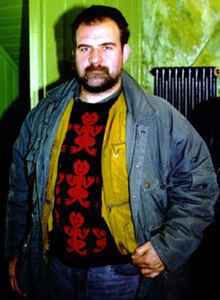 Real Name:
Karl Blake
Profile:
Multi-instrumentalist and singer, born 1956 in Reading, Berkshire, England.
Karl Blake began creating music in the 1970's in his hometown of Reading, England. In 1973, he started playing and singing principally as a result of reading the poetry of William Blake "from a sort of twisted filial interest only" and hearing Black Sabbath, then took on board such influences as Emerson, Lake & Palmer, Faust, King Crimson and Roxy Music, etc. He then went on to contributing vocals, guitar, bass and drums to such bands as Kneeswand, Orange Jelly Baby And The Six White Chocolate Mice, Sedusa, Chrome Toad, and Maggots. None of these outfits produced much more than a handful of gigs, rehearsals and jam sessions. However, in April of 1978 Lemon Kittens was formed, and Karl’s career in music began.

In 1988 Shock Head Peters ended and several new projects were started, including British Racing Green, which produced an over an album’s worth of material that has yet to be recorded or released - the group only did four concerts during its existence as a live concern, and Evil Twin - which was Blake working with the musician, writer and educator David Mellor - they have produced so far one cd, 'The Black Spot' released in 1992.

Shock Headed Peters re-formed as a two-piece in 1990 and went on to record three further cds [their last being 'tendercide' in 1996]. Throughout the late eighties and up to the present day Blake also collaborated for or guested with various other musical projects, including Left Hand Right Hand, for whom [guesting] he recorded three cds and toured extensively. He currently plays bass guitar for Eric Rogers Gae Bolg and the Church Of Fand [in a live capacity only] and bass various other instruments in Rogers other Seven Pines project [also in a live capacity only].
Sites:
Wikipedia
In Groups:
Alternative TV, British Racing Green (2), Evil Twin, Left Hand Right Hand, Lemon Kittens, Shock Headed Peters, Sol Invictus, The Amal Gamal Ensemble, The Invisible Band (2), The Murray Fontana Orchestra, The Reflections (3), The Underneath
Variations:
Viewing All | Karl Blake
Blake, K. Blake

It looks like a lot of Karl Blake's releases are missing from Discogs. He had solo cassettes on his tape label Daark Inc., called "Tank Death" and "The New Pollution" and also had releases on that label under the name Gland Shrouds. I don't see any of these releases on Discogs. Does anyone have these?

January 18, 2021
Why Current 93 is not listed as an important collaboration?