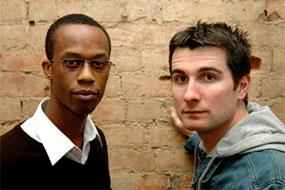 The duo first came to light in 1991 with Seance (featuring the rave anthem Atheama on the b-side) which was released on Reinforced Records. The following year saw a steady flow of breakbeat rave tracks, such as Flatliners, C.O.D. Rider, Peace Maker, X-Plore H-Core and two remixes of their debut Seance / Atheama release.

Nebula II's first P.A. was at Kool Kat in Nottingham, followed by a Christmas gig on the 23rd of December 1992. This was a very large event which also featured live performances from 4 Hero / Manix / Rufige Kru plus DJ sets from Kemistry & Storm, MRB, Goldie, Shot 1 & Coz (aka Nebula II), Cutz, Expression & Holocaust.

Following the success of their releases Joe & Richard, along with MC Rimz & Dancer Peter 'E' started off the North's first Hardcore club in Doncaster. The Warehouse (BYO) became one of the best venues in the country.

Nebula II then moved into Techno & Psy Trance. They set up Celestial Records with A Guy Called Gerald in Manchester. Their first release "The Positive EP" was a collaboration between Richard, Joe, his brother Mark and Tony Thomas who joined Nebula II along with Paul Smith.

After a few releases the newly expanded Nebula II set up the Volt company which then set out to release the finest & purest techno releases possible. Over 100 releases came out of this company in the next three years with artists including Arcana, Spy, Coca, Force Of Nature and of course Nebula II.

Nebula II's next venture was to set up a party organization in Nottingham to outlet the local talent and perform their own music. The first major party was Inner Trance at The Ballroom. Dave Clarke, Thomas P. Heckmann, Shot 1 and Coz played to over 1300 people in Nottingham's biggest techno party to date! More followed with Paul Smith setting up Fusion which combined Techno & Drum & Bass.

I have a couple of white label MP3's in my collection from Nebula II that are titled AA Side and Confusion (Dated 28.10.91). Can't seem to find them here on Discogs - anyone know about them?