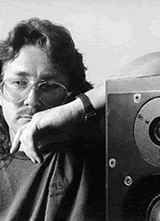 Profile:
Jonty Harrison (Scunthorpe, UK, 1952) studied with Bernard Rands at the University of York, graduating with a DPhil in Composition in 1980. Between 1976 and 1980 he lived in London, working at the National Theatre (where he produced the tape components for many productions, including Tamburlaine the Great, Julius Cæsar, Brand and Amadeus) and City University. In 1980 he joined the Music Department of The University of Birmingham, where he is now Reader in Composition and Electroacoustic Music, as well as Director of BEAST (Birmingham ElectroAcoustic Sound Theatre) and the Electroacoustic Music Studios; for ten years he was Artistic Director of the department’s annual Barber Festival of Contemporary Music. He has played an active role in musical life, making conducting appearances with the Birmingham Contemporary Music Group (most notably conducting Stockhausen’s Momente in Birmingham, Huddersfield and London), the University New Music Ensemble and the University Orchestra (most recently in Stravinsky’s Le sacre du printemps and Vic Hoyland’s Vixen). He has been a Board member of Sonic Arts Network for many years (and Chair between 1993 and 1996). He has also been on the Council and Executive Committee of the Society for the Promotion of New Music and was a member of the Music Advisory Panel of The Arts Council of Great Britain. Commissions have come from many leading performers and studios, including two each from the Groupe de recherches musicales (Ina-GRM, Paris) and the Institut international de musique électroacoustique de Bourges (IMEB), the International Computer Music Association (ICMA), MAFILM/Magyar Rádió (Budapest), IRCAM/Ensemble InterContemporain (Paris), the BBC, Birmingham City Council, the Birmingham Contemporary Music Group, the Fine Arts Brass Ensemble, the Nash Ensemble, Singcircle, John Harle, Beverly Davison, Harry Sparnaay, and Jos Zwaanenburg. Despite renouncing instrumental composition in 1992, he wrote Abstracts, a work for 8-channel tape and large orchestra, in 1998 he has recently completed a work for dance.
Sites:
Wikipedia