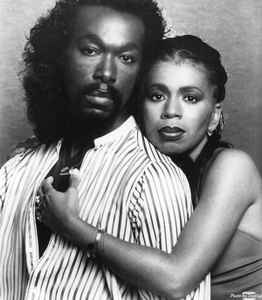 Profile:
Nickolas Ashford and Valerie Simpson were a husband and wife songwriting-production team. They started writing and recording together in 1964, and two years later wrote their first hit song - "Let's Go Get Stoned", recorded by Ray Charles. They then took up staff positions at Motown, where they wrote and produced hits for Marvin Gaye and Diana Ross. During their stay at Motown, Valerie released a couple of solo albums which flopped, prompting her and Ashford to leave in 1973. From then on, the duo concentrated on making their own records, though they also penned Chaka Khan's hit "I'm Every Woman" before finally achieving recognition as artists in their own right. They had two daughters: Nicole Ashford and Asia Ashford.

why Ashford&Simpson remain such underrated artists on their right or as songwriters for other artists remains a mystery to me.
How come that a such talented duo has never achieved the same status of similar names like Burt Bacharach and Hal David, Gerry Goffin and Carole King or Jerry Leiber and Mike Stoller?? Even today their songs and own productions like Inner Life ‎– Ain't No Mountain High Enough have the same timeless quality as some of their predecessors of the 60s golden age of US songwriting. Has anybody ever realized how much emotional surrender and deep text meaning there is to be discovered in songs like 'Found A Cure' or 'Stay Free'??? Surely not their biggest hits. But Ashford & Simpson deserve your attention...listen with you heart and discover how deep their emotional impact is on soul and disco music!! Find a cure...