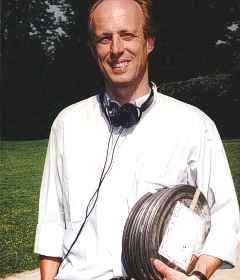 Real Name:
Bernard Fort
Profile:
Bernard Fort (born in Lyon, France, 1954) is a composer and writer. Co-founder and in charge of the Groupe musiques vivantes de Lyon (GMVL, France) since 1976. From 1980 to 1990 he teaches electroacoustic music at the Faculté de musicologie of the Université Lumière Lyon 2 (France) and, since 1982, acousmatic composition at the École nationale de musique (Villeurbanne, France). He has been devoting time to ornithology and the study of natural soundscapes for many years. His music falls mostly in the acousmatic genre. The limits between abstraction and figuration, natural and cultural have always been at the heart of his work, along with a particular interest for the forms the performance of electroacoustic music can take through steady research on the technology available and how it can be applied.
Sites:
bernardfort.com
Variations:
Viewing All | Bernard Fort
B. Fort