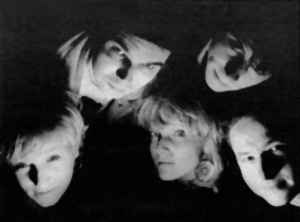 The Heart Throbs were born in Reading, UK, in the mid 80s. In 1989, after a string of singles on different indies, they signed to One Little Indian who released their debut album, "Cleopatra Grip," in 1990.

The group toured the album heavily, which took its toll. Mark Side & Rachel Carlotti left the band in late-1990, in the middle of a tense US tour. Noko (bass), and Curve's Steve Monti (drums) stepped in to replace them, and stayed with the group for their second album, 1992's "Jubilee Twist."

Their third and final album, "Vertical Smile," was released in 1993. The Heart Throbs had somewhat reinvented themselves into a raw, angry band. On this release Noko and Monti were replaced by Steve 'Bes' Wick (drums) and Colleen Browne (bass, later to appear in Pale Saints). The group played their final UK show on December 8th of that year, before disbanding.
Sites:
yinpop.com
Members:
Alan Borgia, Colleen Browne, Mark Side, Norman Fisher-Jones, Rachel Carlotti, Rose Carlotti, Stephen Ward, Steve Beswick, Steve Monti
Variations:
Viewing All | The Heart Throbs
Heart Throbs, The Hearthrobs, The Heartthrobs

February 20, 2021
Would be cool to have a Heart Throbs box set! They must put the Hannett remix of Dreamtime in there though!

December 20, 2020
Someone needs to put together a career retrospective for this band.
See 4 replies

July 6, 2020
Excellent indie guitar band from Reading who produced three noteworthy albums all displaying excellent songwriting skills that led to some evocative powerful and bittersweet tunes with a harder edge than say my other female fronted favourites at the time the Darling Buds. With all three album titles having genitalia references you might be forgiven for lumping them in with the riot girll movement but they were always classier than that. The first and third albums Dreamtime and Vertical Smile have been issued together (as one of the Vertical Smile additional entries on discogs) in a limited edition cd and this release is well worth tracking down as an introduction to their work .The band lasted about 8 years despite like the Buds having internal relationship problems and they are well served on youtube. I saw Sleeper on their comeback tour fairly recently and remember thinking the Heartthrobs were far superior.