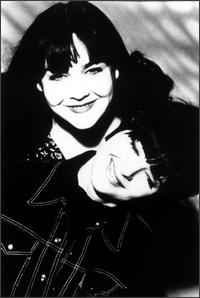 Profile:
The Popinjays are a British indie pop band, mainly active between 1988 and 1994, and again from 2015 to the present. Most of their records were released on the One Little Indian Records label in the UK, and on Epic/One Little Indian in the US.

The band was formed by Wendy Robinson (vocals) and Polly Hancock (vocals, guitar), initially with a drum machine. This line-up recorded the debut "Don't Go Back" EP on Big Cat UK in August 1988 achieving "Single of the Week" in Melody Maker.
Members:
Polly E. Hancock, Wendy Robinson
Variations:
Viewing All | The Popinjays | Popinjays