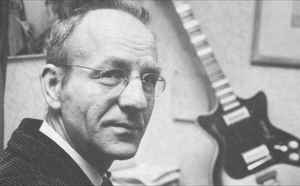 Profile:
Bjørn Fongaard (1919 - 1980, Oslo, Norway) was a guitarist and a composer. He studied at Oslo Conservatory of Music with Per Steenberg, Sigurd Islandsmoen, Bjarne Brustad and Karl Andersen.

He remains famous for his quarter-tone guitar which could be applied to modal and major/minor tonality as well as to any other tonal system, regardless of the number of intervals into which the octave was divided. He further built another guitar able to produce any interval - whether the octave was divided into 12, 24 or even an endless number of steps - for which he composed a series of works: Galaxy, Homo Sapiens, Genesis.
Variations:
Viewing All | Bjørn Fongaard
Björn Fongaard, Fongaard