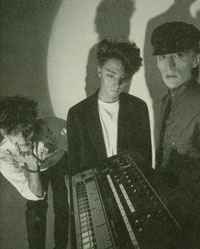 Profile:
Hipnosis (on some records also named Hypnosis) was a successful Italian techno-disco band in the early '80s, born in Parma and founded by Stefano Cundari. It also featured Paul Sears and Ugo Solenghi. At the beginning of the year 1982 Angelo Bergamini from Kirlian Camera joined the band. Cundari had the idea of covering the song "Pulstar" by Vangelis for the label Memory Records. They recorded the song together with Anfrando Maiola from the group Koto. In the ensuing period all of the original members left the project and Bergamini turned down the proposition to stay as a composer and musician of the new line-up and decided to leave the sixty date world tour. At the same time as Hipnosis was developing, Paul Sears officially joined Kirlian Camera's new line-up. In 1987 Cundari released another 7"/12" ("Droid") under the Hipnosis banner. Soon after he passed away. At this point the official Hipnosis-Story ends. In 1991 a CD anthology entitled "Hypnosis" was released. In 1992 a certain Humphrey Robertson released a single and an album for ZYX Records under the name Hypnosis (2). On both releases the font-logo which can be seen on the "Hypnosis"-CD was used, so it seems that the label tried to re-animate Hypnosis with other musicians. The last sign of life of this replica was another 12" record in 1994. In 2006 Angelo Bergamini recorded the Song "Kaczynski Code" for the Kirlian Camera album "Coroner's Sun" under the name Hipnosis Italy. In 2016, for the Greatest Hits & Remixes compilation, ZYX mingled original Hipnosis tracks with selections by Humphrey Robertson as well as yet another Hypnosis, the seemingly unrelated Hypnosis (14) from Canada.
Members:
Angelo Bergamini, Mirko Dalporto, Mirko Limoni, Paul Sears, Stefano Cundari, Ugo Solenghi
Variations:
Viewing All | Hipnosis
Hipnosis Italy, Hipnosys, Hyonosis, Hypnosis, Hypnotic, Ipnosis