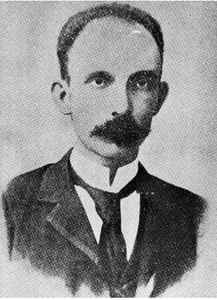 Real Name:
José Julián Martí Pérez
Profile:
Cuban liberal politician, philosopher, journalist, philosopher and poet, creator of the Cuban Revolutionary Party, born January 28, 1853 in La Habana, Cuba. He was killed in a battle against Spanish troops at the Battle of Dos Ríos, near the confluence of the rivers Contramaestre and Cauto, on May 19, 1895.