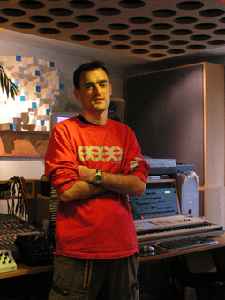 Real Name:
Dom Sweeten
Profile:
Dom is undoubtedly one of the most popular & respected producers in the Hard House /NRG arena. Over the years, he has been involved with a great number of classic tracks & remixes produced under various pseudonyms, most notably his Defective Audio alias & the longstanding partnership with Superfast Oz as OD404.

Dom and Oz met whilst DJ'ing at gigs in Brighton during the mid 90's. They had similar tastes and both were interested in dabbling with music production, so they acquired some studio equipment and started crafting their art. Very few labels were initially interested and the duo later launched Kaktai Records in '97 as a platform for their music.

Dom developed a preference for the studio and has since featured original productions & remixes in a variety of styles on every prominent label within the scene. Apart from his partnership in Kaktai Records, Dom also runs the Hard House / NRG label, Spinball Records & Battle Jaxx which was an outlet for his Funky Hard House.