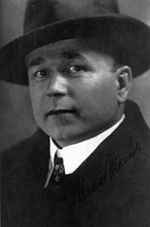 Armas Maasalo studied organ Vyborg, the clerk and organist at the school academic year 1905-1906. In 1907, he enrolled as well as the Helsinki Music Institute and the University of Helsinki, graduating Bachelor of Arts degree in 1911. At the same time, he studied music in the Helsinki Philharmonic Society orchestra of the school. Maasalo further studies in France and Germany in 1919-1925 By field trips.

Maasalo worked at, inter alia, at grammar school music teacher in the years 1916-1952, the National Choir, the years 1915-1949, at St. John's Church organist 1926-1958, at the Church of the Music Director 1923-1951, Finnish Church Choir Association 1931-1960, and the first director of the Sibelius Academy, Church Music Department Director from from 1951 to 1955. He was also a member of the Committee hymnal in the 1930s. Maasalo submitted together with the Taneli Kuusisto and Aleksi Lehtonen in 1943 introduced the Finnish Evangelical Lutheran Church koraalikirjan, who replaced Richard Faltin in 1871 provided koraalikirjan. Maasalo were a number of positions of responsibility in the field of church music; he served. Finland cantor-organist Association and the Finnish Church Choir Association chairman, as well as many of the song festival director and award judge. He was granted the title of Professor in 1947.

Armas wecan production includes two orchestral suites, a piano concerto, organ and choral works, liturgical and spiritual music. He has also written Christmas songs as well as songs for the school song books. In 1932, he published at the Church Music Institute 50-year history.