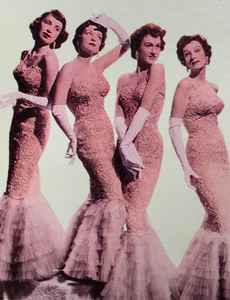 Profile:
Formed in 1946. The Chordettes were a female popular singing quartet from Sheboygan, Wisconsin. They usually sung a cappella, and specialized in traditional popular music. The Chordettes were one of the longest lived vocal groups with beginnings in the mainstream pop and vocal harmonies of the 1940s and early 1950s.

Although the arrangements owed more to The Andrews Sisters than doo-wop, they did, unlike many of their peers, prove fairly adaptable to the rock and roll era. First establishing themselves with the huge hit record, "Mr. Sandman" in 1954, they continued to chart in the last half of the 1950s and the early 1960s, often with cover versions of rock and R&B songs. Their No. 2 1958 success "Lollipop" was the biggest of these.