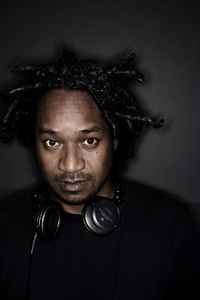 Real Name:
Steve Jerome Rachmad
Profile:
Dutch techno producer, DJ and remixer. At the age of 12 he starts buying his first records: to mix, remix, and cut-and-paste their parts with an open reel tape deck. In such a cut-and-paste fashion, he presented his first release in the mid-1980s. Among these early releases was also the one created for a hip-house/dance artist Tony Scott. From that time on, Steve finds his inspiration in the 1980s dance and electro, works of former Time members (Jimmy Jam and Terry Lewis), The System, Arthur Baker, to name but a few. At the age of 15, he also starts his DJing career with a disco set in a small Amsterdam club. Nevertheless, his love for music urges him to start buying equipment, which would later result in a professional studio. His equipment is mainly analogue, providing him with a chance to explore the realms of warm, alive, non-static sounds. He laid the corner stone of this collection in 1985, by getting a TR-808. A year later he gets introduced to the house music. His attention is captured by the new sounds echoing mostly from Detroit and Chicago. He has releases on labels such as 100% Pure, Cocoon, Underwater, Fragile, M-Plant, Tresor, Sino, Delsin, Music Man, Artless, etc. He also worked part-time in the Outland Records shop in Amsterdam.
Sites:
steverachmad.com, Facebook, Facebook, Twitter, MySpace, SoundCloud, YouTube
Aliases:
A Scorpion's Dream, Adverse Match, Black Scorpion, Continuous Cool, Didato, Dreg, Esteban del Monte, Flexible, Ignacio, Norma G, Parallel 9, Publiq Space, Rachmad Project, Scorp, Sterac, Sterac Electronics, Tarik, The Lonely Guy, Tons Of Tones, V.C.P.
Variations:
Viewing All | Steve Rachmad
Rachmad, Rachmad, Steve, S. Rachmad, S.. Rachmad, S.J. Rachmad, S.Rachmad, Steve J Rachmad, Steve J. Rachmad, Steve Jerome Rachmad, Steve Rachmand, Steve Rachmod, Steve Rachmond, Steve Richmad

Guided by the original grooves to the avant-garde electronics, the dutch DJ & producer Steve Rachmad aka Sterac became definitely one of the most respected artists of the international techno scene.

What is very important to remember is that he grew up under the elements of Soul and Funk and also all the street dance culture, having Arthur Baker and other references such as the main latin Hip Hop names such as Chep Nunez, Omar Santana and The Latin Rascals and their copy-and-paste practices that drove him to learn and do fine edit later for Hip-House artists like Tony Scott.

“Guys like Arthur Baker gave a black-latino taste to German sound”, said Steve Rachmad recently about the transformation of the cold german electro into the American electro-funk era. Like many other groove supporter kids of his age, his first record was the classic 'Planet Rock' from Afrika Bambaata & The Soulsonic Force. “I know there was a really small group of people who were into that sort of sound. I have personally been under their influence up till present time. I still listen to Arthur Baker and similar regularly”, he concluded.

The acquisition of his first TR-808 drum machine represented one of his first major steps as a producer. Why did he choose an 808? “I liked 808 because of Planet Rock and SOS Band records. That’s basically why I bought it. I worked as a newspaper delivery boy then, so I bought it with my earnings from that job. That’s where my studio collection starts, so it’s one of the crucial points of my career as a producer. Over the years I got hold of many other amazing machines, but this one will always have a special flavour for me”, claimed Steve very honestly about his past.