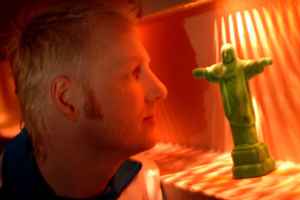 Real Name:
Norbert Küpper
Profile:
Born and raised in Munich, Germany, Klaus Norbert Küpper started to play drum at the age of 11 and later on studied music at the Richard Strauss Conservatory. After live in the 4 continents and play in several bands such as "Agua Na Boca", with based in Amsterdam brazilian diva Lilian Vieira from Zuco 103 as lead vocalist, he has chosen Rio de Janeiro, Brazil, to develop his very personal electronic project. In the year of 2000 the same Lilian went to Brazil and has visited his studio, where they recorded a drum'n'bass version of brazilian classic samba 'O Ronco Da Cuica' and since then Riovolt was born. The first album, 'Digital Audio Bossa' came out three years later only, when he was back to his hometown Munich. Riovolt is signed by italian label Irma Records(LaDouce).(J.A)
Sites:
riovolt.de, MySpace
Aliases:
Norbert 'Nobit' Küpper
Variations:
Viewing All | Riovolt
Norbert Küpper, Rio Volt

March 3, 2008
Riovolt is the electro-brazilian alias of german musician Norbert "Nobit" Küpper.He started Riovolt's project during his 2 years stay in Rio de Janeiro. In the end of the year 2000 he firstly recorded his very personal version of the brazilian classic "O Ronco Cuica" by João Bosco and Aldir Blanc sung by his old friend Lilian Vieira from Zuco 103.The song, a killer drum'n'samba with gorgeous vocal, became a hit between brazilian Dj's. But only in 2003 it was released on Riovolt's first album "Digital Audio Bossa" which came out by italian label Irma Records. "Digital Audio Bossa" became a huge success worldwide specially in Japan, where Riovolt is very popular. Two years later he released "Sambarama" also with Lilian Vieira as one of the lead vocalists together with another brazilian singer,Ju Cassou. A third Riovolt's album is on its way.