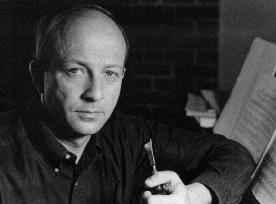 Profile:
Seymour Shifrin (1926-1979) was born in New York City and educated at the High School of Music and Art and at Columbia University; his most influential teachers were William Schuman, Otto Luening and Darius Milhaud. He taught for many years at the University of California at Berkeley and was Professor of Music at Brandeis University. His commissions include those from the Koussevitsky Foundation, the League of Composers—ISCM, the Fine Arts Foundation, the Fromm Foundation and the National Endowment for the Arts. He received the Bearns Prize, the Copley Award, the Horblit Award and Fulbright and Guggenheim Fellowships. His Satires of Circumstance, issued by Nonesuch Records, received the Koussevitsky International Recording Award in 1970. Two years later, Shifrin's Three Pieces for Orchestra (1958), a Naumburg Award- winning composition, again received the Koussevitsky as CRI SD 275. Shifrin's work may also be heard on CRI recordings: Serenade for Five Instruments (1955) on CRI SD 123; String Quartet No. 4 on CRI SD 358; Chronicles (1970), Three Songs (1952) and Five Songs (1979) on CRI SD 504.
Variations:
Viewing All | Seymour Shifrin
Shifrin