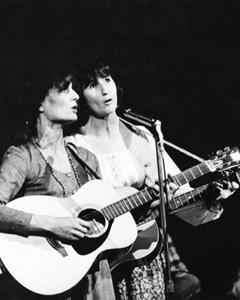 During the early to mid-1960s, Hazel Dickens and Alice Gerrard, two friends living in the Baltimore/Washington DC area started to play bluegrass music together-a heretofore almost exclusively male bastion-creating a style, a repertoire, and a consciousness all their own-and in the process making history. This early music was documented on two Folkways recordings which have recently been compiled into one CD and reissued on Smithsonian/Folkways (Pioneering Women of Bluegrass Music). During the late 1960s and the 1970s they toured together, most often with the Southern Folk Festival, a group dedicated to bringing traditional music as a reflection of southern experience and struggles to southern audiences. During this time Hazel and Alice made two recordings on Rounder Records (Hazel & Alice 0027, and Hazel Dickens & Alice Gerrard 0054). These albums showcased their creative songwriting skills, and their imaginative arrangements of well-chosen material. The Rounder 0027, relying mainly on the two women duet singing and their own instrumental skill with its more sparse sound, is considered one of the most influential of all their recordings and with its recent reissue on CD, has gained a new life and the chance to influence another generation of musicians.
Sites:
MySpace
Members:
Alice Gerrard, Hazel Dickens
Variations:
Viewing All | Hazel Dickens And Alice Gerrard
Alice And Hazel, Alice and Hazel, Hazel & Alice, Hazel And Alice, Hazel Dickens & Alice Foster Gerrard, Hazel Dickens & Alice Gerrard, Hazel Dickens And Alice Foster