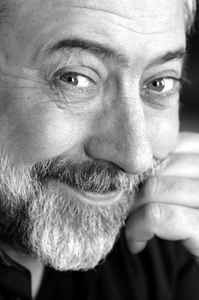 Following the release of first album Leevend his success skyrocketed not only in Belgium but also in Holland. By the mid-80's he widened his field to comics, movies and TV work. In 1987 he stopped performing live, returning to the stage in 1995.
Sites:
urbanusfan.be, houbi.com
Aliases:
Oerbanov V.A., Urbain Servranckx
Variations:
Viewing All | Urbanus
U. Van Anus, U. v. Anus, Urbanus Van Anus, Urbanus van Anus

One of the funniest stand-up comedy artist in Belgium EVER !!! He was most popular during the eighties with his live comedy shows in Belgium and Holland. Most of his Lp's were all recorded live for an audience. His jokes are timeless, even though some of them are over 20 years old, you can still listen to them and laugh so much, it's like the first time you hear them!!!!!!