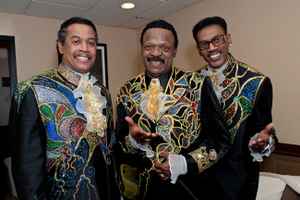 Active in the late 60's until mid 70's.
Considered one of the first "silky and sweet" soul groups, pioneering a trend within the soul circles with the soft and lush male vocal harmonies in the first half of the 70's.
Most of their stuff was written by the legendary Philadelphia team Stan & Bell a.k.a. Thom Bell and Stan Watson as well as their lead vocalist William Hart.
Their biggest hits "La-La (Means I Love You)", the Grammy winning "Didn't I (Blow Your Mind This Time)“ and "Ready Or Not Here I Come" have been heavily sampled by numerous hip hop artists like Wu-Tang Clan, Notorious B.I.G., Nas, Boyz II Men, Missy Elliott and DJ Jazzy Jeff & The Fresh Prince among others.
During the mid 80s the main recording lineup of the group was William Hart, Major Harris and Frank Washington, although they would tour as two separate trios with additional members added.
These members included: Garfield Fleming, Freddie Ingleton, Johnny ("JJ") Johnson, Pat Palmer, Dr. Sallam Love, Eban Brown, Johnney Smalls.