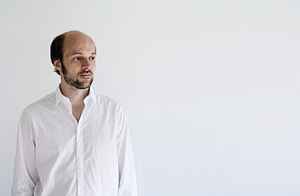 Real Name:
Rajko Müller
Profile:
Isolée is a minimalist house producer whose music is reminisent of indie electronic pop music of the early eighties and ambient techno from a decade on. Isolée is credited with creating the very first microhouse record to reach the club charts. Isolée's 2000 release "Rest" was arguably the first microhouse full-length album.

Rajko Müller was born in Frankfurt, Germany but lived with his family in Algeria at the age of 7 to 12 and went to a French primary school. Around this time his parents bought an organ for Christmas and he tried to do some synth-pop with a school friend. They decided to buy a synthesizer and a drumcomputer. Rajko grew tired of synth-pop and EBM in the end of the eighties and listened more to rock music and independent music. Müller's friends made him discover house music, hip-hop and techno in the early nineties and Müller began a second attempt to record electronic music again. Müller gave a tape to his friend and DJ Andreas Baumecker, owner of Freundinnen records, who worked in a record-store where the members of Playhouse Records used to work - starting off his career.
Sites:
isolee.de, Facebook, Wikipedia
Aliases:
Rajko Müller
Variations:
Viewing All | Isolée
Isolee, Isoleé, Isollee, Isolèe

One of the most original 'house' producers out there. Actually his music is house-linked but hard to describe : intricate melodies, extremely rich textures, stylish post-cinematic atmospheres create a very personal, poetic, colourful, deep universe. Like Carl Craig, Villalobos, Schatrax, Herbert, Moodymann, Morgan Geist and a few others, Isolee is on a league on his own and contributes to give house its 'lettres de noblesse'. He will without doubt generate many followers, as usual very far from the original.