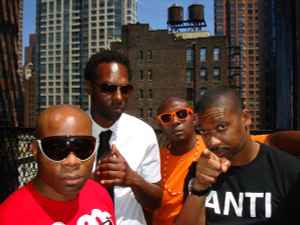 Profile:
Antipop Consortium was one of the most inventive underground hip hop crews in the early 2000's. The Consortium was formed in fall 1997 to turn the commercial Hip Hop scene on its head. It consisted of the three vocalists (Priest, Beans and M. Sayyid) which come from the New York street poetry scene and producer E.Blaize in the background.

After a series of cassette only releases on the own label Antipop Recordings and some underground singles the label Ark 75 released the group's debut album "Tragic Epilogue" in 2000.

Their music is bridging the gap between Hip Hop and Intelligent Dance Music. Because of that avantgarde electronic label Warp Records, known for releasing such artists as Aphex Twin or Autechre, signed the Group in 2001 and released the EP "The Ends Against The Middle" and 2002 the second album "Arrythmia" with world wide acclaim. So the music came also more and more into the ears of electronic listeners.

January 1, 2022
Does anyone know more about the Consortium mixtapes? There was meant to be three volumes released before their debut album, with the album said to include songs from the third volume. A promo of a Tragic Epilogue EP was also sent out in 98, which included a song called Math which later appeared on their Unreleased compilation.
Reply Notify me Helpful

March 2, 2003
the anti-pop consortium have still not received the attention they've deserved. But maybe, that has suited them fine; though i don't know the details of the break-up of the group in.. 2k2? Complete hiphop masters, these guys shit is off the hook, not standing up well agains't but way above much in not all hiphop i've heard worthy of counting as 'important' or whatever. yeah, Just many great times i've had 'with' these guys. Just bought Beans' debut and i'm very glad to see his mission continues without hesitation or fucking it up; no compromises, just like he and mates have always made music. get a release, any one; b4 you are kicking yourself in the future 4 missing out on these guys in you're life 4 so long. peace [no war, bitches]
Reply  See 1 reply Notify me 4 Helpful