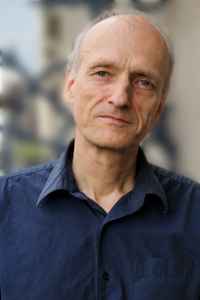 Profile:
Denis Dufour is a composer of instrumental and electroacoustic music, a teacher, a lecturer, a leader of courses, workshops and master classes, and a director of record collections and instrumental ensembles.

Born in 1953 IN Lyon (Rhône, France), Dufour began his musical studies at the Conservatoire national à rayonnement régional (CNRR) in Lyon in 1972, then studied at the CNSM in Paris from 1974 to 1979 with Michel Philippot and Ivo Malec (instrumental composition), Claude Ballif (analysis), Guy Reibel and Pierre Schaeffer (electroacoustic composition).

Researcher and member of the Ina-GRM from October 1976 to January 2000, he assisted Pierre Schaeffer, Marcel Landowski, Guy Reibel and François Bayle in the studio. In 1977 he founded the TM+ ensemble, in which he played the synthesizer until 1987, creating an important body of mixed works. He participated in the development of SYTER (SYstème TEmps Réel), contributing decisively to the design of its interface for live performance, a device for which he composed the first work for instruments and digital transformation in real time, performed at the ICMC 1984. In the 80's, he realized the first graphic readings of acousmatic works on his personal computer, announcing the acousmograph in the realization of which he participated in a decisive way. Still at the GRM, he contributed to the preparation of works, publications and seminars, including, from 1997 to 2000, the Empreintes cycle of composer conferences. Finally, he set up L'atelier to promote exchanges between the GRM, the musical milieu and young composers.

In 1976-77 Denis Dufour was an assistant in the electroacoustic music class at the CNSM in Paris. In 1980, he created the acousmatic and instrumental composition class at the CNRR in Lyon, where he was a full professor until 1995. He produced the annual cycle of Acore concerts, initiated and developed the concept of acousmatic art, and organized some fifty events where more than 300 works were created. In 1995, he took charge of the composition class at the CNRR of Perpignan Méditerranée where he programmed a regular season of events, grouped together since 2001 under the name of Cycle Syntax. While continuing to teach at the CNRR of Perpignan Méditerranée, he was appointed professor of composition at the CNRR of Paris in 2007 and, in 2010, at the Pôle d'enseignement supérieur Paris Boulogne Billancourt (PSPBB) - the first (and only) French class of electroacoustic composition to be accredited within the framework of the European Higher Education Area.

Denis Dufour is co-founder and director of the instrumental ensemble Les temps modernes in Lyon from 1992 to 1998, member of the honorary committee (with Ernest Bour, Klaus Huber and Younghee Pagh-Paan) of the Ensemble Linea founded and directed since 1995 by Jean-Philippe Wurtz in Strasbourg. In 2004, he created and directed the Syntax Ensemble, which has the particularity of including an acousmonium and its performer in its membership.

Co-founder in 1984 of the Quark composers' collective and of the Abso-Absolument movement, he hosted, from 1989 to 1994, the Crest Meetings on acousmatic art, and launched the Futura international festival of acousmatic art and support arts in Crest (Rhône-Alpes) in 1993, also conceiving the programming of events and concerts in France and in Europe. He founded Motus in 1996, an independent structure that brings together all the activities of diffusion, concert, training and record publishing that he has initiated since 1980 in the field of instrumental music, electroacoustic music and acousmatic art. Motus also manages two of the most important mobile sound spatialization devices (acousmoniums) invited to perform regularly in France and Europe, and led by a team of professional performers. At the beginning of 2006, he founded the Syntax structure in Languedoc-Roussillon to manage the actions he has been carrying out in this region since 1995: chamber music training (with or without acousmonium) and cycles of artistic events including instrumental and electroacoustic music concerts, conferences, performances, master classes, meetings with creators, educational sessions and film and video screenings.

Denis Dufour has produced, organized or animated several hundred events, concerts, professional meetings, workshops, courses and master classes in France and around the world. Since 2003, he has contributed to the development of acousmatics in Japan (with the ACSM116 association) and in Italy (with the M.ar.e association), by helping to set up acousmoniums, train acousmatic composers and performers, and organize the CCMC festival in Tokyo and the Silence festival in Bari and Lecce. At the end of 2006, he entrusted the direction of Motus, Futura and Syntax to Vincent Laubeuf.

As a composer, he is the author of more than 150 opuses, including instrumental works (orchestral, chamber, vocal, mixed or with treatment) and acousmatic works of very diverse scope and projects. From 2001 to 04 he was in residence at the contemporary art center of Kerguéhennec (Morbihan) where he composed and played instrumental and electroacoustic works, led workshops for art school students, gave lectures, etc. Since 1980, he has collaborated regularly with the writer and poet Thomas Brando. Honored with various prizes in France (Sacem) and in Italy, his style is undoubtedly more appreciated by the music-loving public and critics than by the strict musical milieu. His works are mainly published on score by Opus 53 and, on record, by Motus, but also in the collections Una Corda, Ina-GRM and Licences.
Sites:
denisdufour.fr, Wikipedia
In Groups:
TM+
Variations:
Viewing All | Denis Dufour
D. Dufour