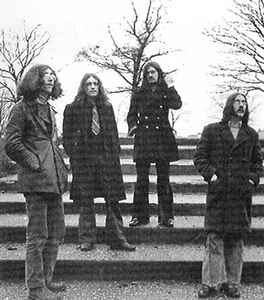 Profile:
1971 classic Birmingham UK heavy prog album from Norman Haines Band (post Locomotive and formerly Sacrifice). The sound is much like Locomotive with perhaps the odd slice of Arzachel style jamming. Featuring Neil Clark on guitar, Andy Hughes on bass & vocals, Jimmy Skidmore on drums and Mr Haines himself on keyboards & vocals. A single was taken from the album (Finding My Way Home/Rabbits) and released under the name Avalanche! Great cover art and a superb version of the Locomotive track "Mr. Armageddon". .
Following the huge success of our recent reissue of prog rockers Locomotive's album, We Are Everything You See (RRLP042), it seemed only right that we should release the other album featuring the group's amazing key board player, Norman Haines.

Originally released in 1971 on the Parlophone label (PCS 7130), The Norman Haines Band's Den Of Iniquity carries on where We Are Everything You See left off, which is hardly surprising, as many believe that this album was actually recorded at the same time. Here again the genius of Haines stands out, but the entire record can be considered one of the finest and least-known prog albums ever to see the light of day.

At its time of release, many shops refused to stock Den Of Iniquity, sighting the album's grotesque cover as just too disgusting for the sensitive record-buying public to cope with. What a mistake. Not only did lovers of prog miss out on a truly great album but also its absence from record shop shelves turned it into one of the most sought-after collector’s items of all time, with originals now fetching more than £1000!

Den Of Iniquity boasts many musical highlights, but its finest moments were two instrumentals, Rabbits and Haines' Life Is So Unkind. Unfortunately, after the release of one final solo 45, Give It To You Girl, Haines called it a day and disappeared into obscurity, leaving behind not just the thought that a potentially-great and influential musician had retired far too early, but that the legacy of his brief career was one of the most collectable prog albums ever.
Aliases:
Avalanche (24)
Members:
Andy Hughes (3), Jimmy Skidmore (2), Neil Clarke (3), Norman Haines
Variations:
Viewing All | The Norman Haines Band
Norman Haynes Band