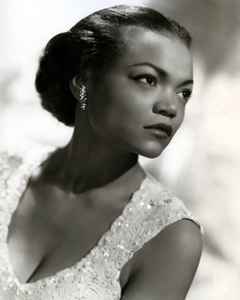 Real Name:
Eartha Mae Keith
Profile:
Born: January 17, 1927 in North (near Columbia), South Carolina, USA, died: December 25, 2008 in Weston, Connecticut, USA.
Eartha Kitt was an actress, singer, and cabaret star whose mother was African American and Cherokee, and whose father was a White-American. Very busy throughout the 1950's and 1960's as a performer, Kitt was also active in social and political movements. She spoke four languages and sang in 12, which she effortlessly demonstrated in many of her cabaret performances. English, Spanish, German, French, Japanese, Turkish ,Hebrew, Yiddish, Pakistani, Swedish , Tagalog, Italian are the languages she recorded in. Orson Welles once called her the "most exciting woman in the world". She passed away aged 81 on Christmas day 2008 (colorectal cancer). Eartha Kitt also played in many films and TV-plays .Her first films in America were New Faces , after her success in the theatre play Leonard Sillman`s New Faces of 1952 . Furthermore she acted in Anna Lucasta, with Sammy Davis Jr., in Mark of the Hawk, with Sidney Poitier , in St. Louis Blues with Nat King Cole , in Synanon , Boomerang with Eddy Murphy and many many others. She did several voice over jobs in Disney films. She was Baghera the black panther in Disney`s Mowgli `s Story. She was the villain Yzma , in The emperor`s New Groove and also in the spin-off Kronk`s New Groove . For the TV-series that followed she earned herself 2 daytime Emmy awards. Eartha Kitt was blacklisted by President Johnson because of her speaking at a luncheon .she was asked for her opinion and gave it directly and honest. Promptly she was out of work during 11 years in USA. Eartha Kitt went on to continue working in Europe and Asia , where she recorded albums and made a few films too. Up to her last weeks in life, she kept busy working. Four autobiographies she wrote : Thursday`s Child ( which inspired David Bowie to a sing with the same name) . Alone with Me .I`m Still Here ( in USA named Confessions of a Sexkitten ) and REJUVENATE! People know her mostly as Batman`s Catwoman from the TV-series of 1968 . She also played many guest parts in series as I Spy, Mission Impossible, The Nanny, etc . Well-known hits are : C`est si bon / I want to be Evil / Just an Old fashioned Girl / Santa Baby / Where is My Man ( remixed every few years, there must be at least 50 ) / L love Men / Cha Cha Heels (with Bronski Beat ) .
Sites:
earthakitt.com, earthakittfanclub.com, Wikipedia, Facebook
In Groups:
Eartha Kitt & Orchestra, We Are Family Collective
Variations:
Viewing All | Eartha Kitt
E. Kitt, Eartha Hit, Eartha Kit, Eartha Kitt And Her Afro-Cuban Rhythm, Eartha Kitti, Eartha Kitty, Earthmakitt, Ertha Kitt, Hertha Kitt, Kitt, アーサ・キット, アーサー・キット