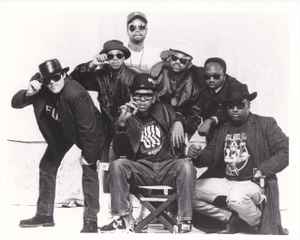 Profile:
Digital Underground, a shifting stable of rappers and DJs led by Shock G, formed in Oakland in 1987. The group's music has always been heavily influenced by George Clinton and his groups Parliament and Funkadelic, in both Digital Underground's grooves and the surreal humor in their rhymes. Digital Underground's first record was the 1987 single "Underwater Rimes" by TNT Records which. At that point, the group consisted of Shock G and Chopmaster J; by 1989, when Digital Underground signed with the record label Tommy Boy, there were seven members.

The group's first album on Tommy Boy was 1989's "Sex Packets". Album singles "Doowhutchyalike" and especially "The Humpty Dance" both showcased Shock G's nasally prolific and lewdly humorous alter ego Humpty Hump. The character was a hit as the single went to No. 11 on the pop charts, pushing the album to platinum sales. "Sex Packets" was followed by "This Is An EP Release" in 1991, featuring two songs used in the bizarre dark comedy "Nothing But Trouble" ("Same Song" and "Tie The Knot", both of which were "performed" by the group in the film, as well). The EP was Digital Underground's first recording with new member Tupac Shakur and the group Gold Money; it went gold, as did the subsequent full length album "Sons Of The P", released that same year, with hit singles "Kiss You Back" and "No Nose Job".

February 26, 2017
I am needing help determining if the cassette single I have is viable. it says Thomsun Origional EN-4137.
Track listings are:
A1: Same Song
A2: Tie The knot
A3: Nuttin' Nis Funky
A4: Arguin' On The Funk
B1: The Way We Swing Remix
B2: The Packet Man Worth A Packet Remix
B3: Wiggle It ( Def Wiggle Mix ) 2 In A Room

I have no idea why 2 In a Room would be with Digiatal Underground....lol.

But again I am just typing in exactly what on the Artwork Cover for the cassette.

The Cassette itself is Black with Silver Stamp on top of cassette saying Maxell UDI with TS4900546 stamped into the cassette.

Thanks for any ones help.
See 1 reply

Underwater Rimes was recorded just shortly after Shock G relocated to Oakland from Tampa Florida. Much like 2 Live Crew, they took advantage of Macola Records' policy of allowing anyone to put out a record, which sparked their career. Whereas Schok G relocated from Florida to California though, 2 Live Crew's situation was vice versa.

Shock G's Humpty Hump alter-ego persona (aka Edward Ellington Humphries III) was only supposed to be a character in the Doowutchalike single (never to make a reappearance), but his popularity called for him to be added as an official "member" of the group.

Shock says "I won't sit here and lie and take the credit for being a genius; Humpty fell in my lap. But, I will accept the credit for running with it and being able to watch it evolve and saying, 'Oh, this is cool. Let's keep this going.'"