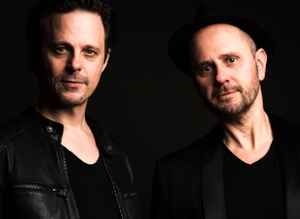 Profile:
Berlin-based duo Booka Shade (Walter Merziger and Arno Kammermeier) have carved out a reputation as one of the most celebrated electronic acts to come out of Europe over the past two decades. With their beginnings in Frankfurt and their sights originally on synth-pop, the duo Booka Shade quickly gained a strong following. In 2002 Booka Shade formed the dance label Get Physical Music (together with M.A.N.D.Y., Thomas ‘DJ T.’ Koch and Peter Hayo), where they would have a platform for their own music.
Three years later, in 2005, their EP’s ‘Mandarine EP’ and ‘Body Language’, (the latter co-produced with M.A.N.D.Y.) launched Booka Shade into the stratosphere with both EPs becoming an international success. The duo further solidified their position as electronic maestros with tracks like ‘In White Rooms’ and ‘Night Falls’, setting dancefloors into a frenzy the world over.
Sites:
bookashade.com, Wikipedia, Facebook
Aliases:
Essential Chrome, Keim, Lanyx, Mos Eisley, Parade (2), Sola Fides, Subtopia (2), Troop, Yaruba
Members:
Arno Kammermeier, Walter Merziger
Variations:
Viewing All | Booka Shade
B. Shade, Booka, Booka Hade, Booka Shad, Booka Shed, BookaShade, Bookashade, The Booka Shade

I've seen those guys in action during 10 Days Off at Ghent and I have to say that they blew me away, well actually I was not the only person. I was so amazed of their live performance and the interaction with their audience, those 2 guys know how to entertain people and make them move. Night Falls, Mandarine Girl and of course Body Language, which was a mix between the album version and the M.A.N.D.Y. remix, where the top moments that night.