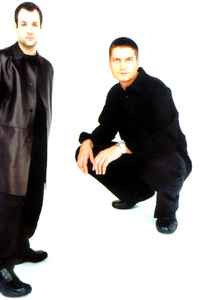 The group was formed in 1993 when Stokes (A&R Director for Pulse 8 Records) met Edwards, (a keyboard player and musical technician) on a session for the label. Adopting the name Tin Tin Out they output a multitude of remixes and were signed by VC Recordings in 1995.

Tin Tin Out first reached the UK charts in August 1994 with ‘The Feeling’. In March 1998 they got their first UK Top 10 with a version of the Sundays’ ‘Here’s Where The Story Ends’. Their biggest chart success came in November 1999 with a cover version of Edie Brickell’s ‘What I Am' with Emma Bunton providing vocals, which reached number 2 on the UK charts.
Sites:
MySpace
Aliases:
Baby Blue
Members:
Darren Stokes, Lindsay Edwards
Variations:
Viewing All | Tin Tin Out
Shelley Nelson, T.T.O., Tin Tin, Tin Tin Out!, Tin Tin Out!?, Tin-Tin Out, Tintinout, tintinout, 挻挻傲樂團