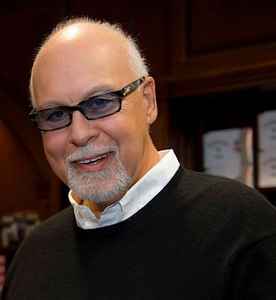 René Angélil started his career in showbusiness in the 1960's with long time friends Pierre Labelle and Jean Beaulne as Les Baronets, a trio of singers performing American and English hits of the time translated in French. They were successful for a couple of years and even toured in the US but disbanded when Quebec's music market embraced a new generation of singers and songwriters.
While Pierre Labelle followed a successful career as a stand-up comic, René Angélil focused on managing some of Quebec's most popular singers of the time such as René Simard (who had a lot of success in Asia in his early years) and Ginette Reno.
In 1981, his contract with Ginette Reno was not renewed. It was not long after, in a difficult period of his life, that he received the visit of Thérèse Tanguay and her daughter Céline Dion. They offered him a demo tape that he listened in their presence. Almost ruined, he instantly believed in the young girl's talent to reach the highest peaks in showbusiness.
His first plan was to make Céline Dion a star in Canada, which he succeeded at in a matter of years. His second plan was to make her a star in the US. As they reached to the top, a close relationship established itself between him and her protégée. Their love story was kept secret for years, although rumors existed, and it was not much a surprise when the truth was later revealed to the public.
Sites:
reneangelilcelebrationoflife.com, Wikipedia
In Groups:
Les Baronets
Variations:
Viewing All | René Angélil
A.R. Angélil, Angelil, Angélil, R. Angelil, R. Angeline, R.Angelil, Rene, Rene Angelil, René Angelil