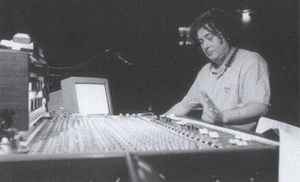 In parallel to his compositional work, he has been active also in the domain of musical research, particularly in the fields of computer aided composition and the musical control of sound synthesis. Projects, realized at different european institutions such as Z.K.M. of Karlsruhe, I.R.C.A.M. of Paris and the Sonology Department of the Conservatory of The Hague. Important to first mention the intensive collaboration with G. M. Koenig in his different computer music projects PR1, PR2 and PR3. Later, in 1993 at the Z.K.M., came FOO, a software package for the composition of music with sound synthesis, designed and developed with G. Eckel. FOO was further developed thanks to an institutional collaboration between I.R.C.A.M. and the Z.K.M., and has recently been implemented in the Linux and the OSX platforms with the incorporation into the project of Martin Rumori. He also participated in the design and development of a tool for the creation of “immersive audio augmented environments”, LISTEN, an European research project, comprising the collaboration of different institutions (G.M.D., I.R.C.A.M., A.K.G., the Kunst Museum Bonn and the University of Viena). In 2003, Raumfaltung, a multidisciplinary installation created in collaboration with G. Eckel. O. Egger and B. Zoederer, was presented at the Kunstmuseum Bonn, as the final public presentation of an artistic project realized with the developed tools.

His music, embracing both the instrumental and the electroacoustic worlds, has been programmed at different international festivals such as the Bartok Festival, Wien Modern, Multiphonies, Musiques en Scéne, Multimediale or Berliner Inventionen. His latest works include “Philía-Neikos” for piano and electronics, comissioned by the GRM; “‘Twixt tinged twining threads” for instrumental ensemble, commisioned by the Ensemble XX Jahrhundert, and premiered at the Schömer Haus; “Streams, Extremes & Dreams”, a 24-channel electronic piece commissioned by ZKM; and “A Media Luna”, a 16-channel electronic piece commisioned by the GRM and premiered at the Maison de Radio France in May 2004.
Variations:
Viewing All | Ramón González Arroyo
R. H. González, Ramon Gonzales-Arroyo, Ramón González-Arroyo, Ramón González. Arroyo