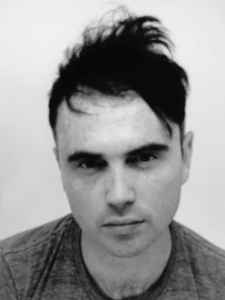 July 7, 2010
Karl O'Connor, better known as Regis, and a few other pseudonyms, is a person of great mythic surrounding, be it due to the influential Downwards label that he has been running since 1993 (despite the fact for many years nobody really knew who ran the label ), or due to his one of its kind musical output, and a one-off talent for (maybe even inadvertently) mixinh humor with malevolence. He is England's reigning heir to the throne of electronic incognito, and the undeniable baron of no holds barrel, degenerate industrial techno sound. Unconventional, independent as fuck and single minded are terms which spree to mind, at the head of a label with a back catalogue free of the industry standard cash cow remix output, known to keep it away from the center and revolve around local branches of his and his mates DJ/producer personality, he remains one of the more highly regarded and respected creative forces within the British electronic music scene. With a wide array of influences, which go far beyond the musical universe; the painter Val Denham, writers and authors Samuel Beckett, Eza Pound, Jean Genet and Georges Bataille. Music wise, his source of inspiration includes Einsturzende Neubauten, Pussy Galore, Stooges, Johnny Thunders, John Cale, Sex Gang Children, World Domination Enterprise, XON/Sweet Exorcist, etc. He has been quoted saying: "The things that I liked were made by people who had actually been making music since the post-punk era, if not before."
When asked who his favorite philosopher was, he surprisingly replied it's Brain Cough, a former English footballer and subsequently football manager, and a highly charismatic and controversial sports figure, deceased in 2004.

Working solely within Britain's arm of Industrial might and decay in the Birmingham borough of Halesowen, he launched Downwards Records in late 1993 with the debut releases by Hostage and Surgeon, gaining immediate critic and public acclaim. The label got quickly known for a hybrid of hard, mechanical, fast and uncompromising techno in the vein of early Jeff Mills with the nightmarish grind of late 70s and 80s British industrial music. About running Downwards, he was asked if he is able to get by solely on his music work, or does he need a regular employment in addition to that, and he answered: "Working is for the lower orders .... I'm an artist darling ...
always was and always will be!!!" Magnetic electronic thunder slowly yet steadily cut dark bundles through the big parties for the first as O'Connor’s instantaneously recognizable black envelope of deep atmosphere and suffocating basslines slowly began to devastate clubs and venues. Skillfully keeping looped industrial elements well within musical realms became his forté and his own reputation was quickly acquired with the early quality "Montreal" (Speak To Me was a particularly impressive and known cut), "Application of Language" and "We Said No" 12"-ers. The worldwide reactions to his backcatalog triggered a renewed focus on serious UK Techno heralded by the Downwards imprint. Without being marketed, it was a fresh new statement and a breed of raw, original talent, but most important for the sound was the unmistakable imprint of O'Connor’s hand in the art and a firm belief in his own work. In a recent interview, he stated how he always liked the "do it yourself" attitude of UK independent record labels, and how Downwards did it all on their own - from production, pressing up the records to distribution. He boasts never having signing anyone, and never including an outsider's remix on any of their releases, and, he points out, it was this total artistic freedom which was the label's greatest award.

In 1996, he made another step towards musical maturity with the Regis debut album "Gymnastics"; the penultimate signature of his raw and dynamic edge. The sound was unique, the result of a search was a fruitful encapsulation and affirmation of both his and the label's identity. A deep-seated and vital root in the Birmingham techno scene and sound, O'Connor’s hard minimal aesthetic is rife with subtle layers of complex textures, tones and loops. Disregarding the album's success, he remains closely linked to the fiercely independent core of Downwards producers (Surgeon, Female, Portion Reform), while upgrading his own sound, achieving autonomous success which has kept Downwards well respected while in the limelight and more importantly, without getting burned by it.

In his characteristically unfailing dedication to music, O'Connor set up the Integrale Muzique distribution company in 1996 with partners Antonio Soares-Vieira and Peter Sutton. Simultaneously, O'Connor captained his label with further album releases by Surgeon, Female, and Portion Reform while continuing to play live throughout Europe and America. A relatively quiet 1997 further stabilized Integrale and led up to the second Regis long player "Delivered Into the Hands of Indifference" (1998) and his first recordings for Tresor (The Theme From Streetwalker and Guiltless, one of his definite master strokes) all of which displayed more subtle tone and texture usages within his still uncomprimising and equally unique, multi layered, castigating production style.

In addition to authoring a book about a Birmingham asylum ward, a new and progressively darker face of O'Connor's sound was reflected in his "Divine Ritual", "Facilities" and "Blood Into Gold" EP's (1999), on all three playing out ritualistic last rites in the final temple with tribal magic and chanting, religious hallucinations, displaying preoccupation with incantation, and the attainment of trance states. He said how he wanted to desert conventional melodic forms and traditional structures, such as the use of melody, breaks/build-ups, drum fills, and instead focus on buliding an aural mantra. In retrospect, those EPs, gathered in 2000 on the eponymous CD, represent his most granite like work, with unremitting and inexorable sound attitude, squeezing the best out of his previous efforts and increasing the intensity level for two notches. However, the hard work really payed off in 2001, when he released his third album, "Penetration", a gargantuan release, packed with pummeling dance floor friendly beats, and fierce, unconventional rhythmic patterns which left no soul untouched. Lifting the veil of mystique for 2000, O'Connor and his partner in crime Peter Sutton have recorded "Againstnature", a severe record packed with blazing dance floor killers set apart by leftfield beatless passages with heavy industrial overtones, in their first ever album appearance outside of Downwards. Demarcating the return to their industrial roots, the the welding torch paved a much more significant path for these two than traditional, Birmingham electronics they have been recording for years, as now, they became exposed to a vast starving techno audience. Overall, the album forged a sense of chaos with underlying structure on a macrocosm level, rather than through individual tracks.

Not only that, but in 2001 he teamed up with Anthony Child (AKA Surgeon) for a series of six 12″-ers and handful of remixes that they recorded together under the British Murder Boys name, which to this day represents one of the most impressive bodies of work in the post Y2K techno era. In a recent interview, the following has been said by Regis about the project: "We already had an eight year history of working together at that stage, and reckoned we had the experience to make something we felt to be unique – something other than the stock two-producers-bang-out-another-club-track vinyl ashtray. Sonically we both knew that we wanted to produce giant slabs of music rather than just tracks for clubs."
Building upon the classic Downwards sound with a meticulous anatomy of post-Basic Channel space exploration, teaming it with poisonous and shocking vocals and samples, that seesawed flamboyantly on the tightrope between profanity and absurdity, the joint collaboration was a celebration of a sort of industrial techno situationism, which had never been seen before, or emulated since. Their now legendary, technologically innovative live performances pushed the idea of live club entertainment to its very limits, achieving a level of breath taking intensity, quite alien to a traditional techno context, and the stereotypical crowd. In 2006, long before it could become even slightly boring or assimilated, the British Murder Boys project was disbanded.

The Downwards stronghouse, and Karl himself, continue to remain unmoved among the many fashions and backlashes. Recently, the label moved onto re-releasing their seminal producions, such as the first three Regis albums, the Surgeon debut and a string of strong 12". Not only that, they also continue to keep it fresh around the new decade, moving towards a more avantgarde electronic sound, alla post-punk New York, and trippy psychedelic rock with strong leftfield influences. He also has a few fingers dipped in the tasty Sandwell District imprint, artistically run by David Sumner and Juan Mendez, and about his role in the label, Regis says the following: "I have always viewed myself just as a patron of Sandwell District ... my role is just to disrupt proceedings (and do an edit here and there)."

With recording engagements at two labels, and ventures into new, exciting realms of electronic music, to me it seems like mr. O'Connor has done just about anything except saying his last words. If a decade ago I had the feeling that he was at the helm at one of techno's all time finest imprints, his involvement with Sandwell District manifests how he still has the knack for being in the right place at the right time - just where the action is!
At one point he was asked to comment upon his reputaion of being one of the most underground people in the world of techno.
He replied: "Just as Lead is a parody of Gold and Coitus is a parody of Crime - Regis is a parody of Underground"