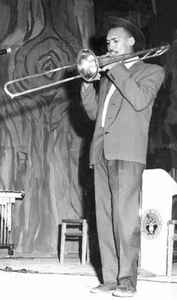 In 1964 Don Drummond was a founding member of the Skatalites.
In the Fall of 1965, Don Drummond's composition, "Man In The Street", enters the Top 10 in the UK. Trombonist Drummond is not only the Skatalites busiest composer, but the most prolific in all of Ska, with at least 200 tunes to his name by 1965. Later, in 1967, his adaptation of "The Guns of Navarone" netted Drummond another top 10 UK hit.
His peers and colleagues felt that Drummond was one of the top trombonists in the world.