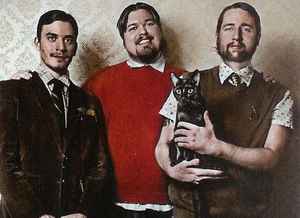 Profile:
Over the last few years, Evol Intent has emerged as one of the leading forces in the United States Drum and Bass movement. Both as a label and as a production trio, Evol Intent are considered some of the biggest up and coming talents in the entire dnb industry. Hailing from Atlanta, Georgia the crew consists of Knick, Gigantor and The Enemy. Apart from being a production outfit, Evol Intent also owns and operates their own label, which functions as an outlet for their own work as well as like-minded artists.

After building an underground following with their first 3 releases, Evol Intent began to get some attention from distributors, both in the USA and overseas. They wound up signing a deal with Alpha Magic to handle their distribution for Evol Intent Recordings. Soon after, Evol Intent caught the eye of the award winning and historic dnb label, Renegade Hardware. Hardware had just launched a new label and they were interested in new material from Evol Intent for the label (Barcode records). After their first release with Barcode, Hardware was quick to snatch up Evol Intent and offer them an exclusive deal as permanent artists on the roster. Around the same time, Dieselboy approached the Evol Intent trio to do a remix for his upcoming cd, "The Dungeon Masters Guide." Upon completion of the remix, Dieselboy asked Evol Intent to do yet another remix for the cd, but this time he asked them to remix a song from a legendary producer known as BT.

Evol Intent has officially gone worldwide and will prove to be one of the hardest working outfits in drum & bass with non-stop DJ international tour dates, a heavy release schedule of originals and remixes for some of the top labels and artists in the scene, and even their own clothing online shop (opening soon!). The trio also has plans to launch a full on LIVE show in the next year.
Sites:
evolintent.com, Facebook, instagram.com, Twitter, SoundCloud, YouTube, MySpace
Members:
Ashley Jones, Mike Diasio, Nick Weiller
Variations:
Viewing All | Evol Intent
Evil Intent, Evol Inter

June 11, 2021
.. oo, and whatsup with these "cruise" that affiliate themselves to a music with only one track that is only decent; i was drillin in yo hood, at teh time..