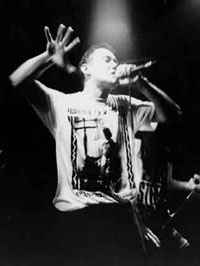 Real Name:
Fermin Muguruza Ugarte
Profile:
Spanish singer, instrumentalist and music producer born on April 20, 1963 in Irun (Guipúzcoa, Basque Country) and brother of the musicians Iñigo Muguruza and Jabier Muguruza. Has been defined as "one of the most influential and charismatic figures of the Basque musical scene". His likes are punk, reggae and dub and his lyrics are full of anti-imperialism, anti-capitalism and the self determination of oppressed peoples all over the world, but especially the Basque Country.

He began his musical career by founding, along with his brother Iñigo and Treku Armendáriz, the band Kortatu in 1984.

When Kortatu was dissolved, he formed with Iñigo and Kaki Arkarazo, the rock group Negu Gorriak.

After the dissolution of Negu Gorriak began his solo career, playing in a fusion style with elements of Latin rhythms, rock, hip hop, funk, soul and drum and bass pivoting around reggae.