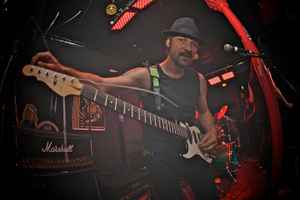 Profile:
Dean G. Smith aka Deangersmith (born 11 February 1969) is a South African–born musician and vocalist based in London, UK. His primary instrument is guitar and vocals although he began his career in Johannesburg, South Africa as a drummer and vocalist in the thrash metal band Ragnärok.

​He is the founding member of several South African and UK heavy metal bands from mid 80's to present day, including Ragnärok, Odyssey, 2 Dogs Funking, Brothering, PijinFist, Mouthful of Flies and Philistine. He appeared as guest vocals for The Blast and played rhythm guitar for the female fronted rock band Balance. He was the creator, producer and host of the radio show, The Metal and Hard Rock from Africa Show for Diligaf Radio.

​Inspired by AC/DC and Metallica in his teens, Dean founded the thrash metal band Ragnärok as drummer and vocalist in 1986. They were considered the initiators of Thrash Metal in South Africa ahead of the burgeoning metal and hard rock scene in-spite of the political climate. The band unofficially released one demo album in 1989, Troops of Thunder. During this time Dean was also guest vocals on The Blast’s 1988 self released two track 7" as lead vocalist on Little Sister and backing on Not Quite The Same Thing, recorded at Universal Studios. Their demo album was re-released as a CDR in 2018 due to new demand from fans in Europe.

​From 1991 onwards Dean played guitar in the band Odyssey, was lead vocalist and rhythm guitar in the band 2 Dogs Funking, founded Brothering as lead vocals and guitar in 1997, winning the Battle of the Bands. He toured extensively around Southern Africa with these bands. Projects during that time include Pijinfist and the female fronted rock band, Balance.

In the UK in 2004, Dean founded Mouthful of Flies as guitarist and backing vocalist with Dan Stevenson from Fallout and Bloodstone as lead vocals and guitars. The band released Ten Negative Sixes in 2007. The album received excellent reviews by Malcolm Dome in Metal Hammer, Kerrang and all major Metal magazines, and they played numerous London venues throughout 2008 and 2009.

​From 2013 to 2014 Dean produced and hosted The Metal and Hard Rock from Africa Show for Diligaff Radio as a way to showcase African metal and hard rock to a wider audience. In his own words, "African bands generally have a huge struggle with regards to internet access and bandwidth issues and publicity, my aim was to get them on Radio and expose them to a wider audience, Dilligaf has an extensive fan base and provided the perfect platform to expose these bands to listeners from all over the world.”

From 2010 onwards Dean has released solo albums under the name Deangersmith.

Deangersmith’s latest album, Lead Us To Your Taker (Disable The Corrupt) contains ten songs released over 2020 and 2021, with the complete album available worldwide on all platforms on 25th September 2021. Originally inspired by the political climate in the world, much of his song writing on this album is driven by themes of Equality and somewhat influenced by the current Pandemic.
Sites:
deangersmith.com, metal-archives.com, SoundCloud
In Groups:
2 Dogs Funking, Balance (49), Brothering, Deangersmith, Mouthful Of Flies, Odyssey (36), Ragnärok, The Blast (3)
Variations:
Viewing All | Dean G Smith
Dean, Dean Smith