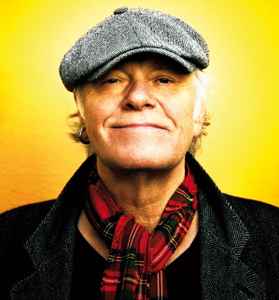 Real Name:
Kim Melius Flyvholm Larsen
Profile:
Danish singer, songwriter, guitarist and actor, born 23 October 1945 in Copenhagen, died 30 September 2018 in Odense. Since the 1970's one of the most popular Danish artists as the unofficial leader of Gasolin' in the 70's and as the best-selling solo artist of the 80's. In total, as a solo artist Kim Larsen has sold approximately 3 million records, equivalent of one record for every two Danes.
In 1969 he founded Gasolin' with Franz Beckerlee and Wili Jønsson. They were later joined by drummer Søren Berlev, and by their third album in 1973 they had grown to be the most popular Danish rock band. The band was characterized by Beckerlee's Hendrix-inspired guitar licks and melodic streetwise social-romantic lyrics, that, even when credited to the band and lyricist Mogens Mogensen, clearly were masterminded by Larsen. The band's national stardom continued until growing tensions between Larsen and Beckerlee led to Gasolin' disbanding on 21 August 1978.
During the Gasolin' era Larsen also had several side-projects. In 1973 he released his first solo album, the folkish singer-songwriter album "Værsgo" which was an instant success with the Danish audience. Three decades after its release it was included in Kulturkanonen, a list of essential Danish cultural heritage. In 1977 he released "Kim Larsen & Yankee Drengene" an English language album recorded in the US in an attempt to achieve the international breakthrough that had failed for Gasolin' a couple of years earlier. This album failed as well. Occasionally he recorded and performed with side-projects Sylvester's Jukebox and Starfuckers (2). He also wrote the 1978 hit "Se Venedig Og Dø" for Lone Kellermann.
Post-Gasolin' after a second Danish language pop solo album "231045-0637", Larsen did a third attempt for international success: In 1980 he moved to New York and established the band Kim Larsen And Jungledreams, this time in a disco/synthpop style. After two albums that proved to fail as well, Larsen returned to his home country and stuck to the Danish language and a national focus which proved instantly successful. His next album, the 1983 release "Midt Om Natten" sold more than half a million copies and remains the best-selling album in Denmark ever. The album was also the soundtrack for the eponymous box office hit movie, which he wrote and co-starred, securing him a "Robert" actors award.
Throughout the 80's with his band Kim Larsen & Bellami he remained at the top of the charts and maintained his status as a national poet and top-selling artist. However by the early 1990's his popularity had gradually decreased and the 1992 album "Wisdom Is Sexy" was a critical failure and sold poorly.
With his next band, Kim Larsen & Kjukken, he turned his repertoire towards pure pop music and lost appeal with the youth. However, with 2001's "Sange Fra Glemmebogen", Larsen regained his popularity and Kim Larsen & Kjukken proved to be his most stable constellation, regularly releasing new material over a period of 20 years until his death.
In January 2018 it was made public that Larsen suffered from prostate cancer. Nevertheless, he completed a national tour over the summer of 2018. His concert at Valdemars Slot on 24 August 2018 proved to be his last.
Kim Larsen was married 3 times and fathered 6 children, including Sylvester Larsen and Hjalmer.
Sites:
kimlarsen.dk, kjukken.dk
In Groups:
Den Gule Negl, Gasolin', Kim Larsen & Bellami, Kim Larsen & Kjukken, Kim Larsen And Jungledreams, Larsen & Co., Starfuckers (2), Sylvester's Jukebox
Variations:
Viewing All | Kim Larsen
K Larsen, K. Larsen, K.Larsen, Kim, Larsen, Lausen