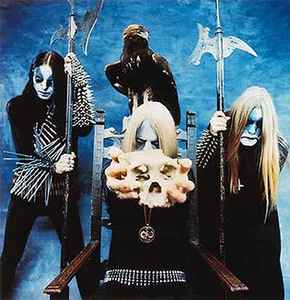 Initially formed as a death metal band Eczema in 1990 by bassist Wargod (Vegard Tønsberg Bakke) and drummer Exhurtum (Carl-Michael Eide), who were joined by Lemarchand (Håvard Jørgensen) on guitar. In 1991 they started to play black metal and renamed the band to Satyricon. At this point they were joined by Satyr (Sigurd Wongraven), who quickly became the driving force in the band and soon the other members either quit or were kicked out. In 1993 drummer Frost (Kjetil-Vidar Haraldstad) joined the band and without few exceptions Satyricon has been a two-man force ever since. The core duo has however utilised various session musicians throughout the years for live situations and also for album writing purposes.

Satyricon's early works were strongly characterised by medieval aesthetics and heavy use of folk music influences and "Nemesis Divina" can well be considered as the peak of this era and style. After this there was a clear change in the musical direction as the 1999's "Rebel Extravaganza" saw the band enter the industrial age with its cold, guitar driven and dissonant sound and overall more contemporary imagery. Since then Satyricon has been pushing the boundaries of traditional Norse black metal, not only by incorporating more heavy metal/rock elements into music, but also by becoming generally a more mainstream media figure in Norway. On their most recent releases the band has found its musical niche in their unique style of blackened heavy metal, which rely heavily on guitar riffs and often complex timings rather than keyboard laden atmospherics.

In October 2015 Satyr was diagnosed with a brain tumor, which forced the band for a short break. Their latest album "Deep Calleth Upon Deep" was released in 2017.