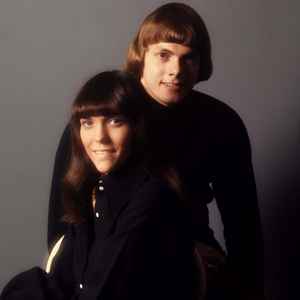 Carpenters were the #1 selling American music act of the 1970's. Though often referred to as "The Carpenters," their name on official releases and press materials was "Carpenters." During a period in the 1970's when louder and wilder rock was in great demand, Richard and Karen produced a distinctively soft musical style that made them among the best-selling music artists of all time.

Originally from New Haven, Connecticut, their parents decided to move the family west to Los Angeles, California. Richard and Karen originally played jazz, with Karen having an interest in playing the drums. They were briefly known as Spectrum and then Carpenters, where they then recorded for a small label, Magic Lamp Records. In their move West, they met Lou Adler who introduced them to Herb Alpert, who signed them to his label, A&M Records in 1969.

While Richard penned compositions with writing partner, John Bettis, many of the duos' hits were written by others and some were cover versions of established hits for other artists, such as The Beatles and Motown's, The Marvelettes. Their 1973 album, "Now and Then." B-side consists of a 9-song medley of 60's hits recorded like a radio show.

Carpenters' melodic pop, produced a record-breaking run of hits on the American Top 40 and Adult Contemporary charts, and they became leading sellers in the soft rock, easy listening and adult contemporary genres. Carpenters had three #1 singles on the Billboard Hot 100 and fifteen #1 hits on the Adult Contemporary Chart. In addition, they had twelve top 10 singles (including their #1 hits). To date, Carpenters' album and single sales total more than 100 million units.

July 30, 2018
I love Karen always have I'm 60 yrs old and I still cry when I listen to you guys music. I've always felt I could have helped her . maybe not . But I still miss her I think she is the greatest, I'll miss her till I die, and hopefully after. You guys created something that is magical , will not ever be redone . It hurts to think she is gone , I loved her so much. and Richard your almost as good as Karen, and I still respect you. Your music made people feel good about themselves. Karen's voice is amazing, like the perfect rose' . I love her and you too.Thank you for all the music you have created.
Reply  See 1 reply Notify me 9 Helpful

January 3, 2017
Yep, they were an amazing duo. Then again, if it were not for Karen Carpenter's alto voice, the whole thing would be mediocre. However, Richard managed to make her that little bit better and so it all made for a decade of solidity from a duo that really delivered the goods.
I personally don't see the point in everything being changed over and over by Richard through the years though (even if ever so slightly). Still I think he took the new times in and tried to his best ability and by all means, it is in reality almost never for the worse. Still I never got the point of these alterations... It worked in the original incarnation of the songs as well :)
Reply Notify me 2 Helpful