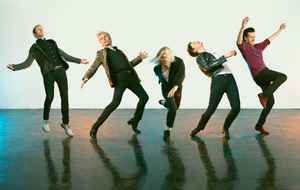 Profile:
Franz Ferdinand are a band formed in Glasgow in 2002. The name of the band was originally inspired by a racehorse called Archduke Ferdinand. After seeing the horse win the Northumberland Plate in 2001, the band began to discuss Archduke Franz Ferdinand and thought it would be a good band name because of the alliteration of the name and the implications of the Archduke's death (his assassination was a significant factor in the lead up to World War I).
Sites:
franzferdinand.com, Facebook, instagram.com, MySpace, Twitter, Wikipedia, YouTube
Aliases:
Blackpool Mafia
Members:
Alex Kapranos, Audrey Tait, Dino Bardot, Julian Corrie, Nick McCarthy, Paul Thomson, Robert Hardy
Variations:
Viewing All | Franz Ferdinand
Ferdinand, Franz