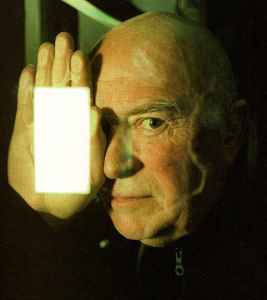 Real Name:
Konrad Schnitzler
Profile:
Conrad Schnitzler (17 March 1937 - 4 August 2011) was an institution in the German electronic music scene for thirty years. He studied with Joseph Beuys in the mid 1960’s, and in the late sixties joined the then fledgling German rock band Tangerine Dream. He added a bizarre, conceptual approach to Tangerine Dream that catapulted the band to legendary status, documented on the bands first album “Electronic Meditation”. Schnitzler left after that first album, forming with his friends Moebius and Roedelius the band Kluster. Kluster recorded and released three albums before Schnitzler again left, this time to pursue his own work under his own name. Kluster continued with just Roedelius and Moebius under the name Cluster. Since the demise of Kluster, Schnitzler released hundreds of albums, cassettes, and CDs, both on his own, and on various labels around the world. Schnitzler passed away in 2011, victim of stomach cancer. His last work was made just 4 days before his passing.
Father of Gregor Schnitzler.
Sites:
conrad-schnitzler.de, fancymoon.com, Wikipedia, Wikipedia, Bandcamp
In Groups:
Berlin Express, Con Hertz, Eruption (8), Kluster (3), Sequenza (2), Tangerine Dream
Variations:
Viewing All | Conrad Schnitzler
C, C. Schnitzler, CON, Con, Con - Spirito, Conny Schnitzler, Conrad, Conrad "Con" Schnitzler, Conrad Schitzler, Conrad Schnitler, Conrad Snitzler, K. Schnitzler, Konrad, Konrad Schnitzler, Schnitzler

February 26, 2019
Still miss Con. I agree with the post below, many would love to see some of those private releases given a proper release by someone very close. I think that would great to see. From 00/014 onward...it's only like 800 releases, right? hahaha...seriously, would love to see someone release a few of them at least.
Reply Notify me 2 Helpful

For me he is the master of electronics..Nothing rivals his works

September 21, 2016
A lot of rlses from Conrad you could find here -> http://conradschnitzlermusic.blogspot.com/
Listen and buy if you like them!
Reply Notify me 2 Helpful

January 15, 2015
Whatever he did - I always enjoy it. Scene-setter and visionary. Unstoppable musical force.

Yesterday in a cd sale in town I picked up 4 promo albums on cd for less than £3. Bargain of the year so far easily. Gelb, Grun, Congratulacion and Con-Struct. Listening now. rip Conrad.
Reply Notify me 1 Helpful

June 21, 2014
Schnitzler NUMBER ONE!
THE KING OF THE ELECTRONIC SOUND!
Reply Notify me 2 Helpful

REST IN PEACE, MY FRIEND!
YOU WILL BE THE TOP GURU OF THE EXPERIMENTAL BRAINWASHING ELECTRONIC SOUND FOR CENTURIES!

September 29, 2011
He was and always will be one of the greatest. An uncomprisingly genious artist and kind human. CON will live on. Respekt Herr Schnitzler und vielen Dank.
Reply Notify me 1 Helpful