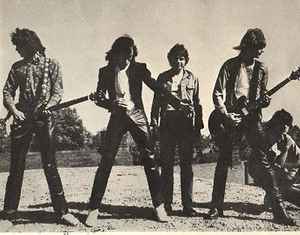 In April of 1976, brothers John and Paul Fenton formed a band in Ottawa, Ontario. After pulling in a drummer, the clueless trio started a straight ahead rock group.

They decided to audition singers for the yet unnamed group and gave Paul's friend Ted a try. He failed the first audition miserably, but was persistent and asked for a second shot.

"He told me later that he went up to his parents' cottage and screamed his head off for two days," says Paul. He got the job! At this point the Fentons still also had their kid brother Michael on bass, but he had to quit when school started back up in the fall. They found a new bass player in Rick McDonough and became THE ACTION!

John had them rehearsing five days a week, it was always 10 - 5 and members had fines docked from their pay for not showing up on time! Paul recounts, "Ted was still in the hole after our first payday, from a week or gigging at the notorious Green Door club." A friend of Paul's, who worked at a local record store, gave him a tape of this new punk rock music from England. The band listened to it and was very impressed with the fresh and energetic sound.

"We still kept quite a bit of our roots intact, though, The Action were heavily influenced by the Stones," says Paul. In a 1977 interview, Ted Axe had this to say about the British Punk influence: "Our repertoire consists of almost all British songs 'cause the Brit punk is the best kind...it's got kick, it's got balls, it's real street-bred music, which is what rock'n'roll music is all about..."

The great writing team of Paul Fenton and Ted Axe at CKCU-FM, c. 1980.

"Our first few gigs and TV appearances were really fun 'cause people didn't have a clue what punk was all about. We were definitely the first punk band in Ottawa..." The line-up, now with appropriate 'punk' names, consisted of Ted Axe (lead vocals), Rick McDonough (bass), Paul and John - now sporting the surnames Phantom (guitars) and Shot Spot McDonald (drums). After making a demo tape in the early fall, the band took a trip to Montreal where they signed with a management firm called New Wave Productions. The company was friendly with Montreco, a new label run by mid-sixties singing star Tony Roman. "He had a plan to exploit this new punk sensation to all the Zellers and K-Mart retail stores" says Paul. When Rick McDonough suddenly decided to leave, they got Michael Fenton back in the band. He was still only 17 years old at the time. "The session was crazy! Tony invited all the Montreal media to it. We performed 'live' on stage in Tempo Studios," says Paul. The EP was released with a die-cut black and white sleeve with the words 'punk rock' emblazoned on it! "Actually there was a short run of records with a photo that slipped into the sleeve. We had them taken off the market when we saw how hideous the picture looked." The twelve-inch had four songs: three originals plus cover of "Waiting For The Man." There was the short and punchy "TV's On The Blink", a song that Axe wrote the lyrics for after his own broke! Another one was and ode to city living called "Downtown Boy", with moronic lyrics like: "You're an uptown girl and I'm a downtown boy and we look good together, all of the time." The insane "Do The Strangle" finishes off the record and features some wild dual lead guitar work reminiscent of the MC5.

The Action caused a stir in early December when they played at a local high school. The principal, D.W. McGahen, filed a complaint with the Ottawa-Hull district American Federation of Musicians that the band's conduct on stage was unsuitable. He cited their obscene gestures which included Ted's faux vomiting act and their "unacceptable" stage dress/ He was later quoted as saying that the performance was an embarrassment to the school." Shortly after the record was released, the band opened up for The Stranglers when they played ottawa on their first North American tour. They also gigged a lot in Montreal, even headlining one big show at the Windsor Hotel with many others on the New Wave Management roster.

Nineteen-seventy-nine began with their recording of a follow-up. The session yielded four songs: "Seafood Mama" (about one of their roadies catching crabs), "Let You Down" (about their unhappiness with Montreco), the high-speed "Press Pig" (about the press) and a slow, Doors-ish tune called "Zona Rosa." The songs were never released. Montreco did manage to issue a sampler LP - Permanent New Wave, but the label went out of business shortly afterwards. By summertime, the band had been offered a supporting slot on tour with the Ramones. "This could have been the big break for the Action," says Paul, as far as our feelings toward our management went. We broke ties with them after this but unfortunately New Wave Management didn't do their homework on the necessary visas and we were turned away from about three border crossings attempting to get into the U.S. and finally we had to cancel our tour. That was the last straw." They never recorded for another record company or in a real studio again. They did, however, perform for a live CKCU-FM radio broadcast from the Rotters Club in Ottawa.

Paul: "It was run by an Englishman named Stuart Smith. I t was a pretty neat place and anything went! It was downstairs from a Lebanese restaurant. Before the shows, they would show cult movies with a film projector. Waitresses would actually serve booze in the bathrooms and smoking pot was done openly at the tables. A lot of cool bands from New York and Toronto would gig at the Rotters Club. We were the house band and we used the club as a rehearsal pit during the day. Our 'pay' was food in the restaurant upstairs, and beer and recording sessions at Stuart Smith's 'studio'." Later on in the year, Andre` Action took over on drums. They kept playing and rehearsing at the Rotters Club and Smith eventually became their manager, booking them on a tour of southern Ontario. "We opened for Teenage Head at Larry's Hideaway in Toronto and played some clubs in the London area," says Paul, "really, though, the tour was depressing. Lousy accommodation, top put it mildly, and the audiences were apathetic. A little while after this, we put the Action to rest, for the time being, anyway."

In the early fall of 1979, Michel and Paul relocated to New Windsor, MD in hopes of trying the music scene there. By November, they'd decided to move back to Ottawa and reform the Action. After their dismal tour, John left the group and music altogether. hey became a quartet, with Paul handling all the guitar duties. In 1980, they hit Montreal again, did some rough demos and started playing at the newly re-opened Rotters, which was now under new management.

A live tape culled from a show at the '80's Club that January has them performing none of their early material save for "TV's On The Blink", concentrating on newer tunes like "Klepto", "Rich Kid", and "Jealousy" (which was written about John's decision to leave the group). '81 marked their final year. They added another guitar player, Freddy G, to fill out the sound. Ted Axe, who by this point had become very influenced by David Bowie, was taking them into a more artsy direction. "At a few gigs he would be on LSD and would be acting quite eccentric! Really though, the band's direction and his direction were going different ways. We were heading in a rock'n'roll direction, and he was going towards more art-rock," says Paul. "The final 'divorce' came on the way to our last gig, when I fired him in the car on the way to the gig." - Alan Wright

After the break-up Paul played in a number of bands including Number One, The Blushing Brides (a Rolling Stones tribute band), The Fenton Brothers (aka "The Fentons" with Mike, 1984-90) and finally, The Bleedin' Hearts (who cut two albums on the Crosscut label, a Rounder Records European subsidiary). Paul is now a solo performer, showing off his slide guitar prowess on 1997's "Binson's Blues", 1999's "Worldwide Slide" 2001's "Vancouver Blue" 2002's "Live! In Toronto" and late-2005's "Judgement Day." Michael can be found fronting his own band, The Unsung Heroes and Ted performs and records in Seattle (new residence 2004) under a variety of pseudonyms, sometimes as 'James Vincent' (but it looks as if Paul has talked him into 'becoming' Ted Axe once more as of late 2003). Brother John, the 'Godfather' of the whole schmiel continues playing and contrary to Alan Wright's recollection was often playing more frequently than the Action in the year or two after he left the group. He is still rocking and recently guested with brother Paul at Blues on Bellair in Toronto's Yorkville Village.
Sites:
Facebook, Facebook, natcaprock.blogspot.com
Members:
Glen Russell, John Fenton (5), Michael Fenton (3), Paul Fenton (4), Shot Spot MacDonald, Ted Schwarzman
Variations:
Viewing All | The Action (4)
Action