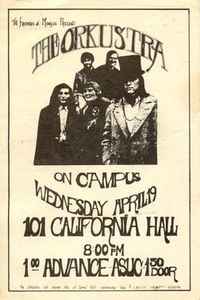 Profile:
The Orkustra were a San Francisco free-rock collective born in the mid 1960's, featuring the notorious Bobby Beausoleil, and David LaFlamme in his pre It's A Beautiful Day days.
Although they played extensively around the Bay Area and at many festivals, they never released anything during their lifetime. Only decades later did an album appear documenting this important and seminal band of the then-new psychedelic scene.
Members:
Bobby Beausoleil, David LaFlamme, Henry Rasof, Jaime Leopold, Terry Wilson (4)
Variations:
Viewing All | The Orkustra
Orkustra