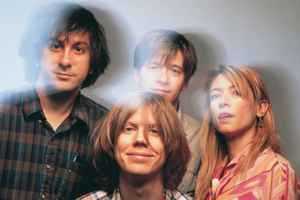 Profile:
Sonic Youth, initially comprised of guitarist / vocalists Thurston Moore and Lee Ranaldo, guitarist / bassist / vocalist Kim Gordon and drummer Richard Edson, were formed in New York City in 1981. A product of the No-Wave music scene of the late 1970s, the group had their roots in abrasive, experimental music, with Moore and Ranaldo having previously worked with the experimental composer Glenn Branca. The band were joined in 1985 by drummer Steve Shelley, and recorded 15 albums together, as well as many side and solo projects. Their work has been consistently challenging and innovative, and they are widely regarded as one of the most intriguing and influential bands of their time. This view has been added to by the strength of their record "Sonic Nurse", which also featured the talents of Jim O'Rourke. O'Rourke left the band in 2005. In 2006, Mark Ibold joined the group.

In September 2011, Sonic Youth went on "indefinite hiatus" following the separation of Kim Gordon and Thurston Moore (the couple had been married since 1984).

May 2, 2022
I will never forgive them for the way they treated Nardwuar. Good music tho.
See 2 replies

November 23, 2021
Broad vinyl recommendation: all the mainline non-SYR albums got a Steve Shelley-overseen reissue in 2016ish. Word is the US presses got the Shelley approved masters, but the UK/EU (Back to Black stickered) simultaneous presses DIDN'T. I grabbed 4 or 5 of the US ones for gapfill (already had CDs but SY only band I needed all on wax) without complaint, all good quality in both mastering and quality control of the vinyl itself. Unless you're a first press junkie, or want specific presses for certain albums for whatever reason (want OG DN with poster, etc) I suggest it's the way to go for a new buyer.

July 7, 2021
The most honest, incredible, influential band!!! Without SONIC YOUTH life itself, would be so empty, dull, boring, uninspired. Personally, back in my 16 they collapsed my music world, and rebuilt it again in free forms. That was such a strong emotion of freedom there. Their music. No cliches. The unexpected forms of making a song, feelings full of pleasant surprise, the sounds; made exclusively by their instruments, the tools, their vintage equipment, the tunings, the poetry, the lyrics, the attitude, the knowledge, the fun. Huge band of the American History if you’d ask me.
I was lucky enough to see them live and meet them in person. So friendly, gentle, cool and simple people. Damn, I miss them. There will be no band like them in the future. So unique. I guess we feel all lucky enough to having crossed paths in life with those 4. And witnessed their craft, their magic gift to art, echoing at the universe.
See 1 reply

May 24, 2020
Not everyone gets it, because it is not for everyone. If it is for you, this band is. Massively influential for what came to be called "Alternative Music." That qualifies as 'Nuff Said, but it's just scratching the surface. These folks are a true definition of aural art. I saw them 7 times live while a band. Never a dull moment. Only a few pretty notes. No regrets.
See 1 reply

July 3, 2019
Maybe the best Band ever existed?
In my opinion they got close to it!
See 2 replies

November 13, 2016
I don't usually like to comment on here, but the first comment on this page should do nothing but reiterate the positive comments of rose1978 below. The Motörhead comparison is spot on, especially in terms of longevity and for what they mean to so many. They sounded like no other and despite the obvious influence they have had down the years on all manner of musicians, no other sounded quite like them.

Can't wait to see Thurston with Swans at the Roundhouse next year. The same venue I saw Sonic Youth play Daydream Nation in full. THANKS FOREVER SONIC YOUTH!